Yammer, the Facebook/Twitter-style online intranet for companies, is coming off of a big year, even as larger competitors like Salesforce try to compete with their own enterprise social networking products. Having generated revenues between $5 million and $10 million in 2010, Yammer more than doubled that in 2011, reaching towards $25 million according to industry sources.

Now, we’re hearing it’s working on a big new funding round — in the $40 million range if not more.

When I asked founder and chief executive David Sacks about all this, he said that in fact revenues had tripled (although he didn’t disclose any numbers). “We don’t have any financing news yet,” he explained, “but given our traction and expansion plans, it’s reasonable to assume that additional financing is likely.”

He also said that the company ended the year with 4 million corporate users, up from 1.6 million at the end of 2010. 800,000 of the current users are paid via its freemium enterprise model — companies who joined and then hit the paywall once they had enough users. Sacks compares these stats to professional networking site LinkedIn during its formative growth years, as it had 1.6 million members in 2004, 4 million in 2005, and 8 million in 2006… so, of course, he’s aiming for between 8 million and 10 million users by the end of 2012.

But everyone from startups to publicly traded companies is getting into the stodgy enterprise intranet software business with easier-to-use products that are patterned after popular consumer sites. While Yammer may have just raised $17 million back in September, a simple answer for why it’s looking at more funding so soon is that it needs to build on its growth ahead of its many rivals. 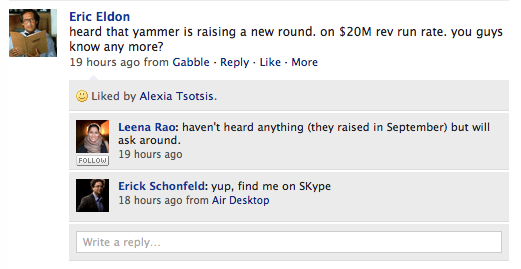 One expansion area could be sales hiring, judging by the success it had last year when it brought in some enterprise sales and customer support leaders David OBrand and Samantha Loveland from Salesforce, who helped it land new deals with big clients. Although much of its business has continued to be organic growth among small to medium-sized businesses, it’s natural for a company like this to try go the traditional sales routes into larger customers.

Another way it might put the funding to work, I hear, is international expansion — something that not all of its competitors have been focused on. To that end, the company has already been opening offices in Europe and hiring quickly  in that region. Sacks didn’t confirm this plan, he just observed that its freemium model has already helped it get users around the world.

An additional area that needs development, at least according to most TechCrunch staffers who are on it every day, is the user interface. The AIR desktop app is missing a bunch of features the web site has, like the activity stream. It, and some of its mobile clients, crash occasionally. Messages and notifications don’t always seem to be delivered on time, etc. As tough-minded early-adopting power users, we have a lot of strong feelings about the product, that we’ll share more about shortly. The main point, bigger picture, is that Yammer is in an increasingly tough league — even if most traditional enterprise intranet tools are far worse, its product is also having to sell itself to people who use cutting edge consumer-quality products, who expect only the best.