To combat the lack of transparency around customer satisfaction with daily deals, Groupon today launched a new version of its Merchant Center. It includes the real-time percentage of deal customers who would recommend the business to a friend, plus their comments. Customer satisfaction is a big question for merchants wondering if they should start or continue running daily deals. Data on satisfaction rates is scarce, though. Worse,  a 2010 study showed that just 36% of customers spend more than the value of a deal, and just 20% return to the business. The feature could be a double-edged sword, encouraging retention or desertion depending on a merchant’s feedback. 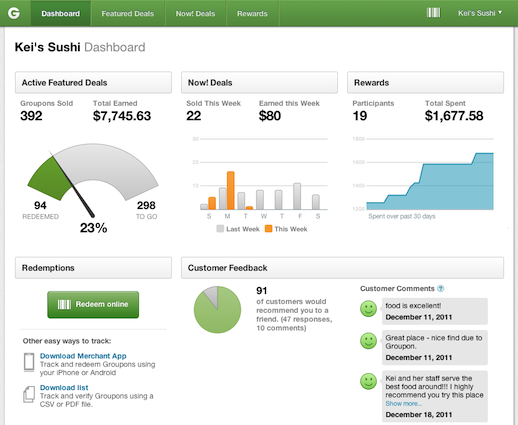 The customer feedback system may not be totally accurate, though. To calculate the satisfaction rates, Groupon surveys users immediately after they redeem a deal. So far, only 1 million customers have left feedback, so merchants won’t always have a representative sample. The comments may also be highly polarized, with only those who truly love or hate a deal taking the time to respond in words.

Considering chronic gripes about fine print deal term, and employee dissatisfaction than can influence the customer experience, the new feedback stats are a gamble for Groupon. Previously, merchants may have assumed customers were happy since they were getting a big discount. Positive review may also have less influence on a merchant’s decision to stick with Groupon than whether it’s actually helping their business. Meanwhile, a poor recommendation rating or an especially pissed off commenter could lead them to ditch the daily deals service.