I know there are lots of people out there who have passionate feelings about Ron Paul. He’s a principled and independent fighter for old-time American values, or a conspiracy theorist loon, or someone who let idiotic racist stuff get published in his newsletters decades ago… or whatever else it is that you see about him that makes you react.

I’m not here to take sides and tell you how to vote, I’m just writing this article to point out that he’s been gaining the most new Facebook fans every day for most of the past month. He’s now the second-most popular candidate behind Mitt Romney (and Democratic incumbent Barack Obama, of course), according to the Inside Facebook Election Tracker.

Paul currently has 655,000 fans, half of Romney’s 1.23 million, and a fraction of Obama’s 24.3 million, but he’s well ahead of third-place primary candidate Michele Bachmann. Meanwhile, Newt Gingrich, who has appeared at many points in recent weeks to be Romney’s main Republican challenger, has had pretty minimal growth. 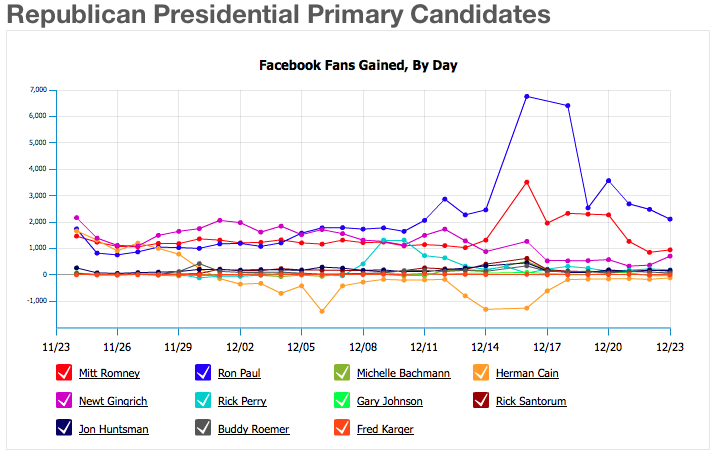 Fan counts are not a perfect proxy for real-world popularity because candidates can do things like buy lots of ads on Facebook, run contests on their Pages to bring in more people, or promote their Like buttons on their campaign web sites. Also worth noting: the fan counts here are far lower than the active voters out there, so this is a subpopulation of politically involved people. Facebook has around two-thirds of the US online population, and anyone in the world can like Facebook Pages. It’s just that most people don’t.

But the trends do seem to reflect many of the voter shifts in the primary over the last month.

By numerical gains, Paul has had the most new fans every day since December 5th, the election tracker shows. The rise began around when previous top outsider candidate Herman Cain announced he would drop out. It leveled off for a bit during a short Rick Perry resurgence, right around the 8th of the month, when Perry released his widely hated “Strong” video against gays in the military. So maybe Perry gained some Facebook fans even though he created the most disliked video on YouTube? But as Perry’s blip tapered down towards zero, both Gingrich and Paul grew.

It’s true that Romney has surged over the past week or two as Cain, Perry and Gingrich have faded down. But Paul has gained even more every day, with monthly growth highs among all candidates at nearly 7,000 new fans per day at some points last week. Maybe it’s because of how people are receiving his debate performance.

What does it all mean? Until a few months ago, online success for Paul might have been chalked up to the relatively small but very earnest group of online supporters, who have helped him win online polls for years. But now he’s also winning real-world polls, like in the Iowa primaries. His Facebook fan growth is looking more and more like a proxy for his overall trajectory.