Facebook’s Frictionless Sharing integration has been a huge win for Yahoo! News US. After just 2 months, 1 million articles are being shared to Facebook daily leading to 500,000 daily referrals. To build on this, Yahoo! has expanded the integration to 26 more of its news sites. These include many international sites such as Yahoo! News Philippines and France, as well as vertical sites like OMG, Music, Movies, and Games.

Yahoo! has also just launched  a notifications system across its US sites. It will will alert users when someone replies to one of their comments, a big change in a stock they track on Yahoo! Finance, when their fantasy sports team wins, and more. Yahoo!’s head of social and personalization Mike Kerns tells me tonight’s changes could “increase engagement and traffic. If we can scale [the Facebook success of Yahoo! News US] globally, it will have a a big impact on our media inventory.”

13 million users, predominantly under age 35, have opted into the Yahoo! News US Facebook sharing integration since its launch at f8. This has increased referral traffic from Facebook by 3x. Kerns says the data shows that Yahoo! and Spotify have become Facebook’s biggest Open Graph sharing partners. Along with sharing articles to Facebook, the integration powers on-site reading recommendations based on the activity of friends. 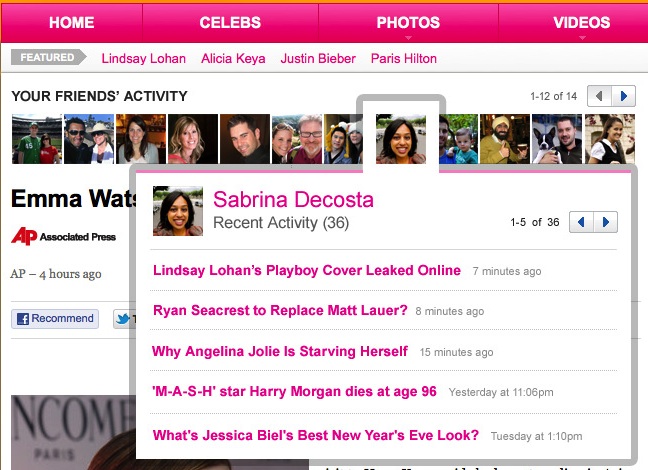 I asked Kerns his thoughts on the debate about whether Facebook’s Frictionless Sharing is ruining curation. Some say the integration Yahoo! is expanding to more sites causes a chilling effect where users don’t click because they’re embarrassed to share their reading activity. Kerns disagrees, telling me, “The younger demographic is totally comfortable with a persistent state of sharing. People should be comfortable as themselves.”

Auto-sharing is clearly helping news sites, so don’t expect them to shy away from it. There’s no incentive for sites to miss out on page views in the name of protecting the Facebook user experience from what some see as spam.

The notifications feature could keep users bouncing between Yahoo! properties, much the way Facebook’s notifications boost internal referral traffic. US users will now see a bell icon on the top right of Yahoo! properties that will display counters of new notifications. When hovered over or clicked, users can view their alerts and click through to investigate them.

Kerns describes the notifications feature as “low hanging fruit that we should have had for years.” After Q3 2011 saw Yahoo!’s net income down 26%, a boost in both external and internal referral traffic would come as some welcomed good news. 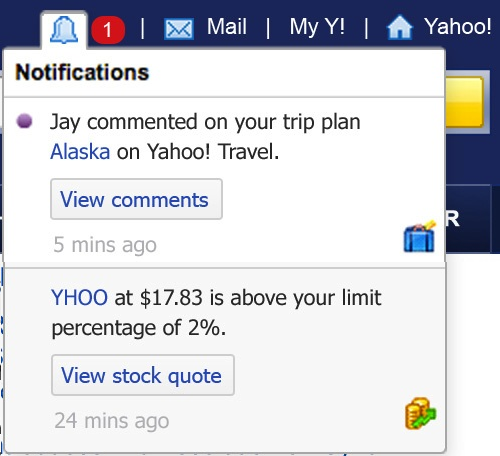