Tutorspree is looking to disrupt the major tutoring companies, like Sylvan, by giving people a way to find highly qualified, private tutors online — without having to deal with messy (and untrustworthy) Craigslist listings.

To do this, Tutorspree screens all of their tutors prior to listing them on the site — the company says that all of them have four-year degrees (or higher), or are in the process of earning them. The site also gives tutors a profile to describe themselves and list their credentials, and it lets users rate their experiences with each tutor, which is key.

CEO Aaron Harris says that the platform now has three thousand tutors, with a waiting list of over six thousand hoping to get added. About half of those three thousand tutors have been contacted thus far by users. He also points out an interesting trend around who is hiring the tutors: there are plenty of students, but many of the site’s users are people who have finished school.

At this point Tutorspree’s tutoring sessions are all the old-fashioned sort: one-on-one, in-person meetings. But Harris says that over the coming months that company will incorporate more technology into its service: tutors will eventually be able to conduct lessons via online video, and there will be online material as well. The company is also working on building out a repository of material that its tutors can draw from.

Tutorspree isn’t the only company offering a tutoring marketplace online — competitors include TeachStreet and Skillshare (which focuses on group classes, as opposed to private sessions). 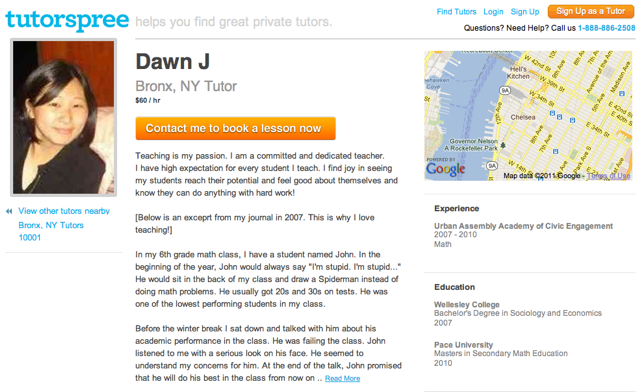