GoChime, a graduate of the 2011 TechStars Seattle program, is today announcing that it has raised $630,000 from a host of entrepreneurs and angel investors that include Geoff Entress, who has invested in companies like Hootsuite and Cheezburger, Walter Winshall, an investor in Harmonix (Guitar Hero), Co-founder of Feedburner and former Googler, Matt Shobe, Dave Carlson (investor in Socialthing, Daily Burn), and Founder and CEO of Bigdoor Keith Smith — to name a few.

What is GoChime? Simply put, the startup is delivering relevant offers to people based on real needs they’ve expressed across their social media profiles. In other words, it’s direct marketing for social, something which GoChime Co-founders Matt Walters, Josh Emert, and Austin Evarts are convinced has not yet been done successfully.

Seeing that millions of people express the desire for products and services on social media every day, whether that be for a Android phone, a vacation, or help studying for the GMAT. They experess these desires to their friends, followers, and really, the public domain. GoChime wants to eliminate the need for every day users to have to search Google for products or solutions by making use of the reams of commercial intent data available on social networks, in turn providing customers with value by saving them time and money.

Thus, GoChime wants to enable brainds to effectively come to the rescue of these potential customers by offering promotions and offers that are contextually relevant to the needs these people have already expressed — delivered to them by their existing customers and fans.

GoChime matches each desire expressed with products or solutions provided by the corresponding brands when and if that expression is contextually relevant. GoChime matches relevant brand promotions in its database and passes it off to brand loyalists, who then decide if the expression is relevant to the matched promotion. Those that aren’t relevant are skipped, and those that fit the bill are then used by the brand evangelists to start a conversation with the person, with the incentive of a discount, coupon, etc. being dangled in front of that potential customer.

Chimers are graded by a “reputation score”, based on “professionalism, information sufficiency, and relevancy”, according to the GoChime Co-founders. Giving its users the chance to interact on behalf of the brand, the service then allows those with the best scores to stand out as the top social media brand influencers, presumably going on to well-paying jobs in marketing at their favorite brands.

The startup wants to provide and environment in which those people with an “innate skill for engaging with other people on social media” facilitate the connection between companies and their potential customers. By delivering the right promotion at the right time (presumably to the right person), GoChime thinks that it can play a part in defining the new economy that is emerging on social. The Co-founders say that, so far, they’ve seen CTRs and conversion rates that far exceed traditional advertising options, and are convinced that they’re onto something.

The startup is still working out its business model, but you can get a sense of where this is going. If GoChime can connect brands with top social media influencers and acquire new customers, then the startup gets paid and, in turn, provides a social service while doing so. Obviously, this model is all about effectively finding the best influencers. It remains to be seen whether its “influence score” is enough of a litmus for brands to seek out those influencers, but it’s yet another social-centric direct marketing alternative to display advertising.

Chime in and let us know what you think. 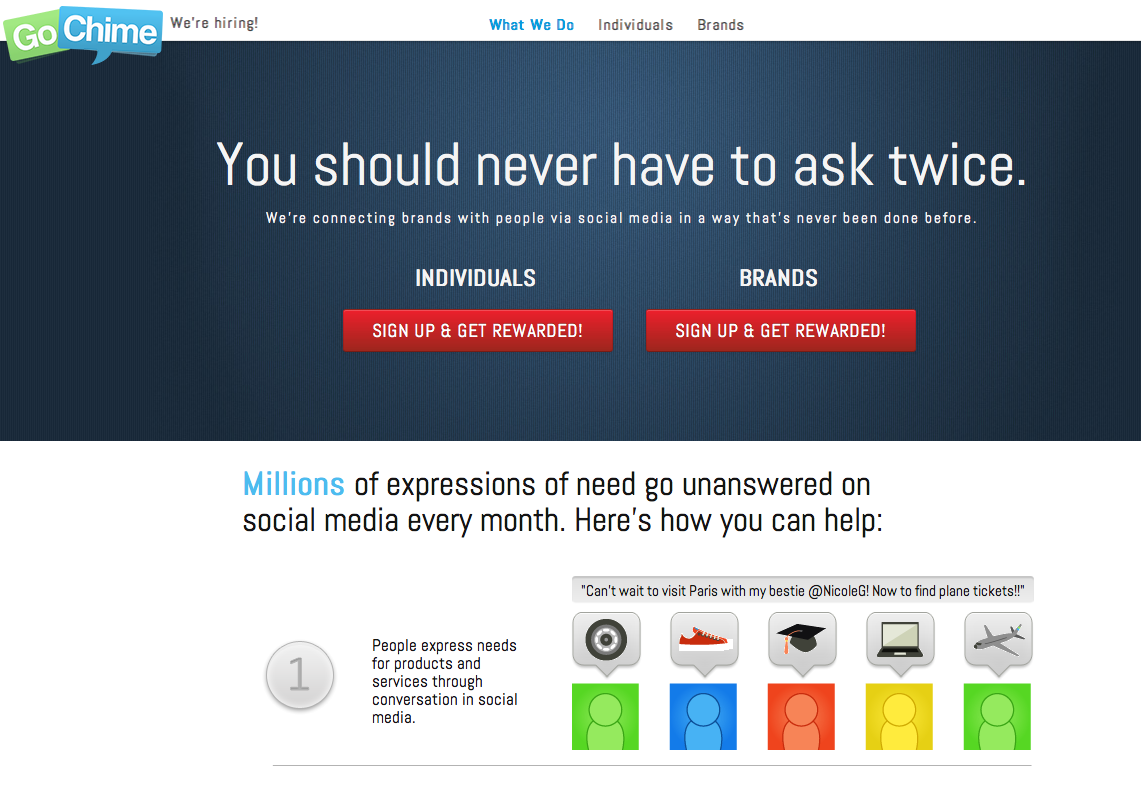