As we get closer to the Christmas holidays, online retail spending continues to soar, says data and web analytics company comScore. A total of $6.3 billion was spent online in the past week, bringing the total spending for the holiday season to $30.9 billion. That’s a 15 percent increase versus the same period last year.

The term “Green Monday” was coined by eBay in 2007 to describe the Monday occurring around the second week of December, which has tended to be the heaviest online spending days of the year, as it is one of the last days of the week where consumers can purchase and still receive shipping by the holidays. Over the past six holiday shopping seasons, “Green Monday” has consistently ranked among the top spending days of the season. Free Shipping Day is a marketing event that takes place Friday, December 16, and is also one of the last days when merchants offer free shipping with delivery by Christmas Eve.

While these days didn’t bring in as much as Cyber Monday ($1.25 billion), this has been the heaviest spending week to date. And comScore says this will most probably be the peak spending period for online shoppers, as spending usually tapers off this week as Christmas approaches and more consumers flock to brick and mortar stores for last-minute gifts.

One trend comScore highlights in the report is that deals such as discounts and free shipping were ‘frontloaded’ at the earlier part of the holiday shopping season this year compared to last year. The highest growth rates in purchasing in the time period between Thanksgiving and this past Friday took place during the days nearer to Thanksgiving. Growth rates for earlier dates remained in the mid-20s, with more modest growth rates in the teens in the middle part of December.

And there’s no doubt that free shipping has been a huge incentive for online retailers this holiday shopping season. Each week of the online holiday season-to-date has seen free shipping occur on at least half of all transactions. During the week of Thanksgiving and Cyber Week, at least 3 in 5 transactions used free shipping.

For this past week, the percentage of transactions with free shipping reached 56 percent, nearly 4 percentage points higher than the same period last year. And retailers like Amazon have been extending free shipping deadlines well past “free shipping day,” which should help increase the number of purchases using the offer.

While we’ll probably see growth rates in spending and total sales spent online drop in the next few weeks, we could witness a surge in spending, weather permitting, post-Christmas. Last year, a blizzard in the Northeast U.S. region helped contribute to a surge online spending for the pre-New Year’s period to record levels. 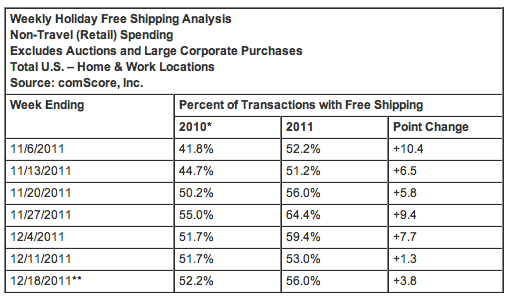