Zynga is about to go public at a valuation that could make it worth around $9 billion, so the press is busy looking back at how the social gaming leader came to be this successful. There’s lots of discussion around its intense company culture, its contentious relationship with Facebook, its virtual goods business, its currently flattish traffic — or basically everything, if you read this giant article today by my former colleague Dean Takahashi at VentureBeat.

But here’s a closer look at how the company came to dominate social gaming on Facebook in 2009, based on conversations I’ve had with Zynga employees and rival developers over the years. It’s a case study in how startups can win markets by hitting them at the right time and place.

On January 1 of 2009, a year and a half after its founding, Zynga had grown its user base to a respectable 23.9 million monthly active users. That was good for the Facebook platform at the time, but nothing mind-blowing compared to other social gaming developers. But by the same time next year, it had grown by ten times that number to 240 million, according to AppData, and was larger than all of its social gaming competitors combined.

Yes, it had built up an experienced team, and an infrastructure system designed to scale quickly with growth. But it had also figured out the types of games that users wanted — especially casual simulations. And it knew how to bet big on those. 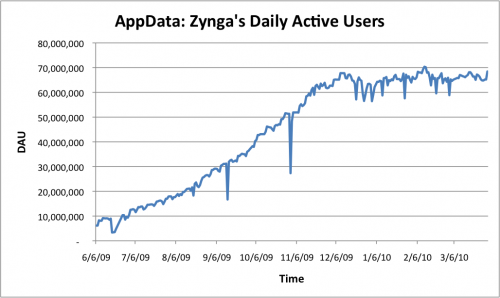 One key way was Facebook’s own changes. In early 2009, Twitter has hitting its first big hype cycle, and Facebook was concerned. So it decided to move from an algorithmic news feed of stories to a real-time stream of information that focused on status updates — a bid to grab the attention around the micro-blogging form factor.

Zynga reacted by designing its communication channels for real-time. The result was users seeing all sorts of stories around games (“spam,” as many of us called it). When Zynga launched its formative simulation hit, FarmVille, that June, it had already refined how to reach users in this new environment.

That wasn’t all the company was doing. It had also discovered that it could get a return on its investments in Facebook ads when many other developers were still aiming for purely organic growth. During the first part of the year, it began increasing its spending for games — and kicked that tactic up a notch when FarmVille launched. These ads weren’t so much used to seed users, but to help accelerate growth once a game was already growing.

On top of all of the other things it had going for it, plus the aggressive optimization for the new platform, and the heavy ad spending, it was able to roll out a line of other simulation hits over the rest of the year (Café World, PetVille, FishVille). And with each new hit, Zynga was also able to cross-promote users from existing games.

By the late fall of that year, ads were becoming more expensive as other developers (and other advertisers) began buying them more. And Facebook re-overhauled its platform, going back to an algorithmic news feed and cutting back on other viral features like notifications. Each Zynga launch that fall was smaller than the previous one. AppData began tracking daily active users that June, which provides us with a more detailed view of just how engaging Zynga got during this time. The company started with around 10 million DAU before FarmVille, and then plateaued at nearly 70 million at the end of the year (see graph above).

Since 2009, Zynga has come out with other hits, like FrontierVille, CityVille and newer ones like CastleVille. But it’s never seen the same scale of growth or the same number of consecutive successful launches. Today, AppData shows the company with nearly 50 million DAU and 220 million MAU.

Prospective investors shouldn’t get all depressed, though.

What Zynga has done is refine everything it has had to offer better products and make more money. It hired more and more veteran game designers to build higher-quality games, which has helped it maintain older titles for years and launch better new ones. And it has gotten better at monetizing from its existing user base. The company has steadily grown revenue over the years, in spite of factors like increasing ad costs and the addition of Facebook’s 30% cut from Credits, it has shown in S-1 filing amendments.

Along with its still-dominant position on Facebook, its increasingly successful moves into mobile gaming, and its massive spending power — and all of the other factors that have made it successful to date — Zynga has an interesting future. It still has the top five games on Facebook. It’s also gaining solid numbers of new users on mobile, and it has big ideas for where things might go. In its pre-IPO roadshow, it says it expects social network users to double from one to two billion, with web social gaming growing to a market size of 900 million. So maybe it’ll have another 2009.