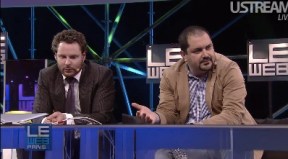 What’s the music industry’s biggest problem? Big questions for Sean Parker today, interviewed by TechCrunch’s Alexia Tsotsis onstage at Le Web. His appearance attracted the biggest crowd of all sessions at the three day conference. As usual, he was asked where the social web was going and approached by a member of the audience who claimed to be his son from the future. But mostly he talked about music.

Since Napster shut down in 2001, Parker invested in Spotify as a way of “redemption” and to pursue his passion for music, he says. “Napster hired all the wrong people because I was too young and naïve to distinguish between confident executives and someone who just had more experience than me and had the eloquence to impress me.”

It “motivates [Sparker] internally to want to fix the industry of music so that great art is finding an audience”.

So what is wrong with the industry? In Parker’s view, the overall size of the record industry has decreased to the point where it is too difficult to make money as a record label. “The record business has collapsed over the last 10 years and went from a $45 billion to a $12 billion worldwide industry. That’s the biggest problem.”

In this environment, labels shy away from taking risks and turn down potentially great artists for those whose sound seems familiar enough to guarantee success. Spotify could become what the terrestrial radio was 60 years ago: a music discovery system, enabling listeners to check out new bands for free before purchasing their work.

Soon came the inevitable question about the infamous Facebook – Spotify partnership. What made Parker assume that we all want to share every single song we listen to with our friends? Well, they “wanted to force the product to go social”.

“I’m not sure everyone will want recommendations from their friends, but if I listen to a track Spotify should tell me if any of my friends have listened to it too.” This “consumption pattern” of music discovery had not existed before the Facebook – Spotify partnership, he claimed.