You don’t need to work on Wall Street to have seen this one coming: Today, for the first time since its NASDAQ debut on November 4th, Groupon has fallen below its IPO price, which initially placed the company’s stock at $20 per share. The company’s stock opened (at first trade) at $28 per share, with a market cap of $17.8 billion.

It’s currently hovering at about $17.30 per share, down nearly 14 percent on the day. The daily deal behemoth’s stock has been on a three-day slide, and this marks the third day in a row of double digit declines. This came after the stock hit its all-time (really, all-month since IPO) high on Friday at $26.19 per share.

Welcome to the public markets, Groupon . 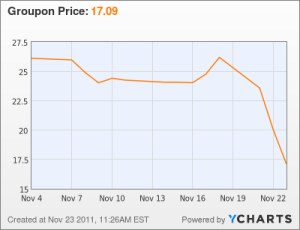 Some might say that, although Groupon was up 31 percent before this week, raised $700 million selling 35 million shares at $20 each before going public on November 4th — mind you, the biggest IPO since Google in 2004 — the decline was inevitable. That there’s no way that the company’s current performance (and short-term prospects) work out to a $15 billion+ market cap and sky-high valuation. (You can read our assessment of Groupon’s value in contrast with soon-to-IPO Zynga here.)

But it also seems that the recent decline of Groupon’s stock is a result of just how many shares it sold at IPO. Groupon sold about 5.5 percent of its stock on November 4th (of its 637.3 million shares outstanding), meaning that a relatively small amount of stock was available to short sellers. As Crain’s points out, the premium to borrow shares (in advance of shorting) dropped from 90 percent to 30 percent early this week. And it looks like the short-sellers are moving fast and furiously.

The next few months will no doubt be marked by a series of ups and downs, and it will be fascinating to see where Groupon’s stock bottoms out. I have no dog in the fight and, frankly, am optimistic about the company’s long-term prospects and want to see them be successful, but I think they have a long way to fall yet.