Yahoo’s famous, long-standing billboard on the San Francisco skyline is coming down. In two weeks, the space will be available for some other company, according to a report in the San Francisco Egotist. The billboard outlasted 4 Yahoo CEO’s. It was put up under Tim Koogle in 1999, and survived through Terry Semel, Jerry Yang, Carol Bartz, and now Interim CEO Tim Morse.

The retro billboard was put up in a dot-com era before Facebook and Twitter. There’s some speculation now on whether a new dot-com might take over the space.

The agency that created the iconic billboard, Black Rocket, wanted to create something very different from all the other dot-com-boom startups that were putting billboards up on 101 in Silicon Valley. The Yahoo billboard is on Interstate 80, on the approach to the Bay Bridge.

The billboard, which featured the tagline, “A nice place to stay on the Internet”, had room for two lines of ever-changing text. Sometimes those lines would promote a Yahoo product, but it also featured favorites like “You look cute today.” It also had a hotel-like “No Vacancy” light. But, the “No” was not lit up, implying Yahoo had room for some more guests.

A sister billboard in LA was used on the cover of this Yahoo’s 2002 Annual Report: 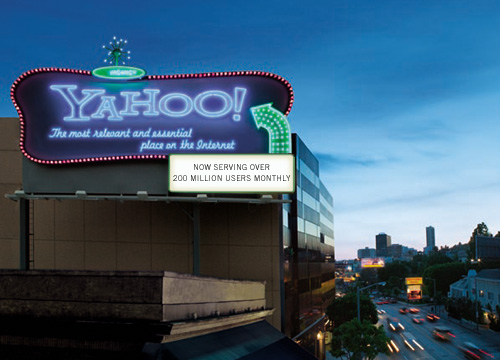 There were other sister ones put up in Soho and Times Square in New York.

One of the ads creator’s told the Egotist, “San Francisco is losing what has turned into an icon.” On Facebook and Twitter, many Yahoo employees, former Yahoo’s and Yahoo visitors are calling it a sad day.

For more on the backstory of how the sign came to life, read the Egotist article.

Update: A “Save the Yahoo! Billboard” Facebook page has been created with 66 likes so far. If anyone thinks this page might really save it, there’s a billboard bridge in Brooklyn I have to sell you.