Fujifilm’s retro-styled X100 threw the photography world into a loop with its combination of retro styling, serious photo chops, and the actually innovative “hybrid viewfinder.” I had my issues with it, but it still hits me right in my retro-bone, and I look forward to the future installments in the X-line. Which brings us to today’s news.

Pictures have leaked of the LX, supposedly Fuji’s upcoming mirrorless interchangeable lens camera, or at least of an incomplete prototype. And I’m happy to say that it’s as premium as they said it would be. 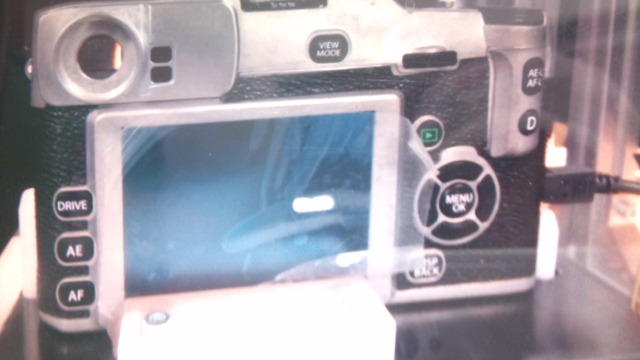 Of course, it’s looking a little rough – this was probably a prototype on show at some internal presentation. But one of the sources in contact with the source himself says that it’s nearly complete and may even be ready in December. Personally I doubt that they’ll be able to actually make a release before then (Fuji lately has had long delays between announcements and availability), but it’s certainly possible we could see an announcement.

The camera itself looks very chunky, larger than the X100, with more squared-off corners. The mount is reportedly an internal Fuji one, not compatible with anything else, and it will ship alongside three primes and a zoom: an 18mm f/2, 35mm f/1.4, a 60mm, and a zoom probably in that 18-60 range, possibly shorter. The sensor, as some might have guessed from those focal lengths, is said to be APS-C, possibly an evolution of the one in the X100. The viewfinder is almost certainly the hybrid EVF/OVF.

As for price, someone claims to know a Fuji rep who put the body at $1400, which is a good ballpark regardless of whether it came from Fuji or elsewhere. There’s much in common with the X100, but it comes without without that expensive glass, and a few improvements here and there makes that price sound about right.

The pictures were originally posted at Chinese forum Xitek but swiftly removed.