In September, Salesforce founder Marc Benioff hinted at a new work management product, Do.com. Today, the CRM giant is finally releasing more details about Do, which is a simple task management mobile and web app for both businesses and consumers. While the app is still in private beta, we have invites for 200 TechCrunch reaers. Using the invite code ‘XIBUSPAHYN’ you can sign up for the app here.

Do is born from Salesforce’s acquisition of social productivity and task management app Manymoon earlier this year. Manymoon is a favorite on the Google Apps Marketplace and is one the platform’s most downloaded Apps Extensions.

Do tasks and project management app allows small teams and individuals to manage task lists, organize projects, and capture notes. The app allows you to assign tasks to other users (non-Do users can be sent an email to join), and in joint tasks, users can comment on tasks, accept and reject assignments and more.

Do also serves as an Evernote-like application and allows you to take notes from within the app, and assign yourself tasks from parts of your notes.

As Salesforce says, the app is meant to be used for both everyday consumer, list management use as well as for small group use within a business. So you can use the app to plan a dinner party or coordinate a marketing launch. Once you have a number of different tasks with shared users, you’ll see a Chatter-like Activity Feed, with real-time alerts and access to any comments on specific tasks. 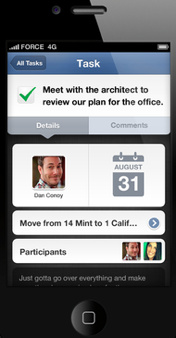 The app is available via a web-based HTML5 app, as well as an iOS app. Do will also be available in the Google Apps Marketplace, Salesforce App Exchange, Chrome Web Store and LinkedIn App Marketplace. Any actions in one of these apps will be synced across your Do account. And Do is integrates with Dropbox so you can share files within the application from the file sharing service.

Do is free for now but Salesforce says eventually it will be adding paid features such as administrative controls and customization. For now, Do is still in private beta but will be opening up to larger audience over next few weeks, and will eventually open to the public in late November.

Of course, there are some similarities between Salesforce’s enterprise social network Chatter and Do, which also has a social communications function. But Salesforce’s senior VP Sean Whiteley, says that Do is meant for very small groups and teams, whereas Chatter is ideal for large enterprises and businesses. Whiteley also says that it will eventually integrate Do with Chatter in the future. 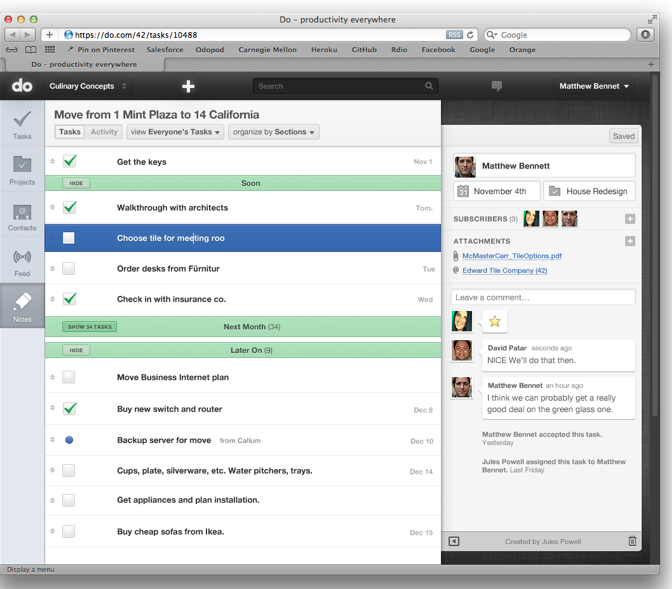