Short version: Probably the best-looking game I’ve ever played, despite a general lack of imagination. The gameplay itself, though, is (without exaggeration) probably less sophisticated than Doom. 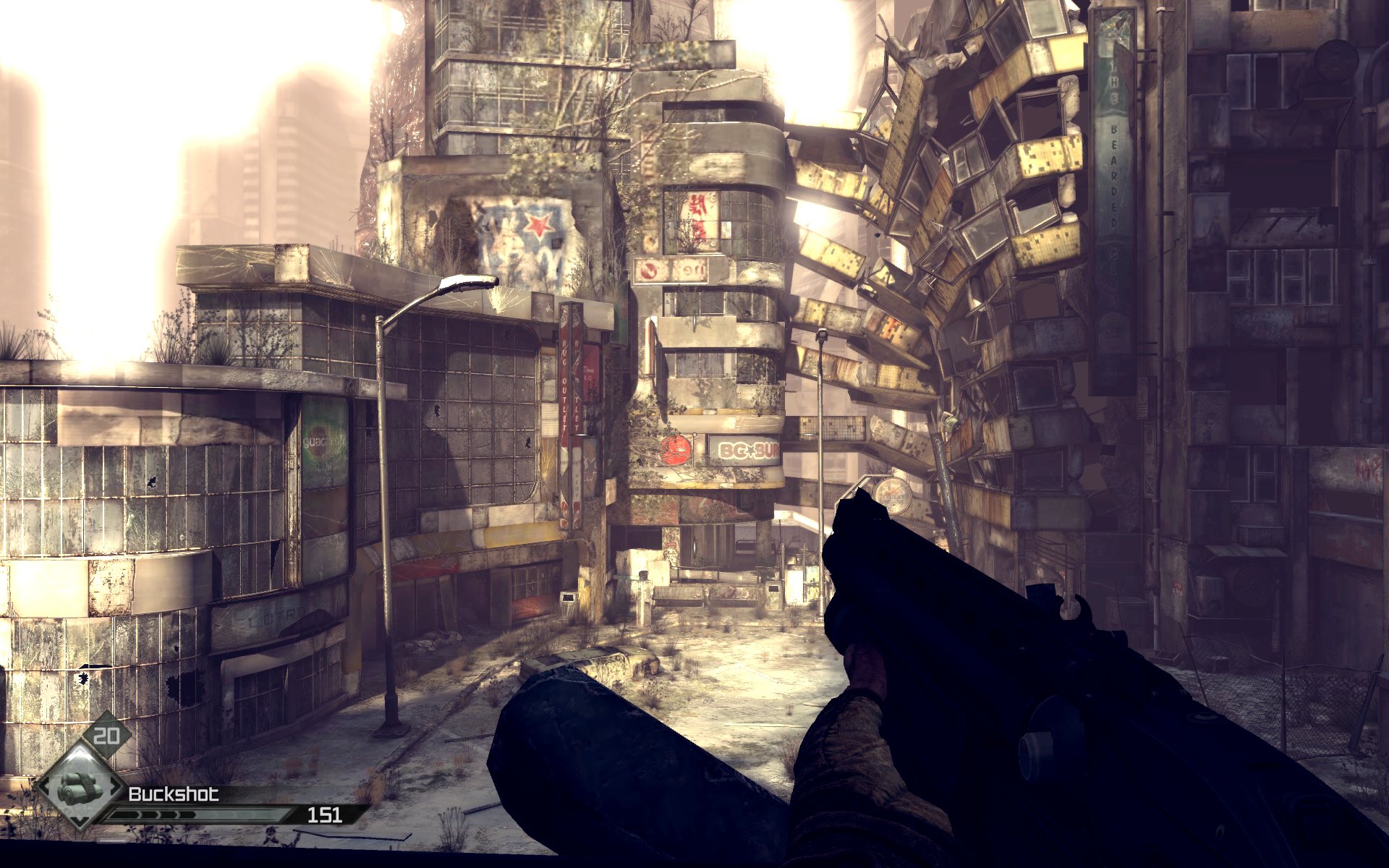 Note: open these screenshot links in new tabs to see the full resolution – it’s worth it.

One can’t always begin a review with the graphics, but with Rage the discussion must begin, and in a way end, with them. id’s John Carmack and his team have put together an absolutely astounding world and engine. What it lacks in originality (every visual aspect is either cliche or an FPS standby) it makes up in fidelity and attention to detail. The organic look of the environments, whether frontier town, abandoned refinery, military base, repurposed cave, or ruined city, is unequaled in games as of this review. The only games that come close are Crysis 2 and Battlefield 3, though neither of those has the on-rails gameplay that allows every vista and every hallway to be lavishly decorated, deconstructed, and otherwise visually enhanced.

It really is a feast for the eyes, and small details are everywhere. It’s clear, especially from the paucity of the gameplay, that the focus of this team was on the creation of fully-realized environments, however restrictive and unoriginal they may be. It’s occasionally breathtaking, and rarely anything less than competent. 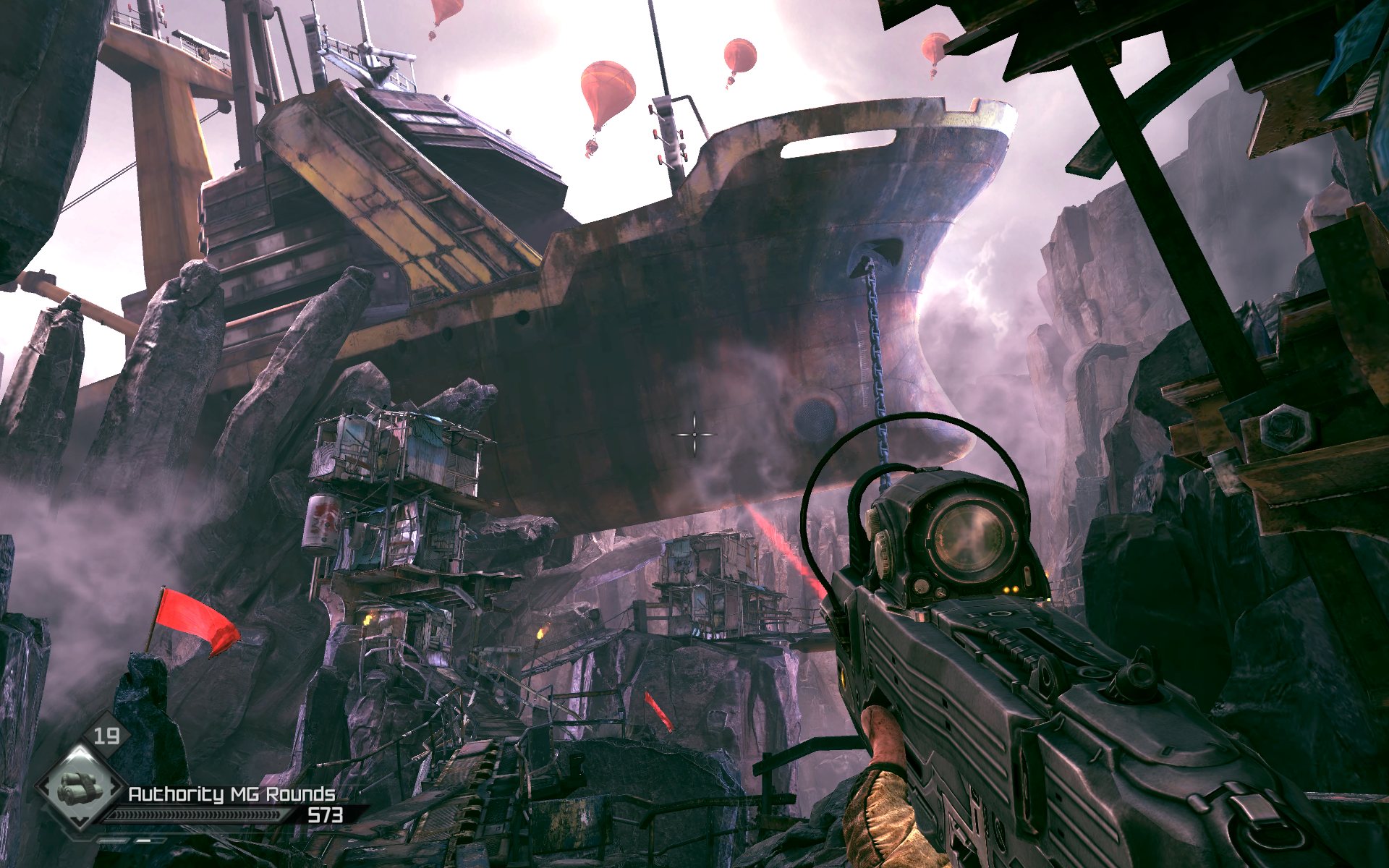 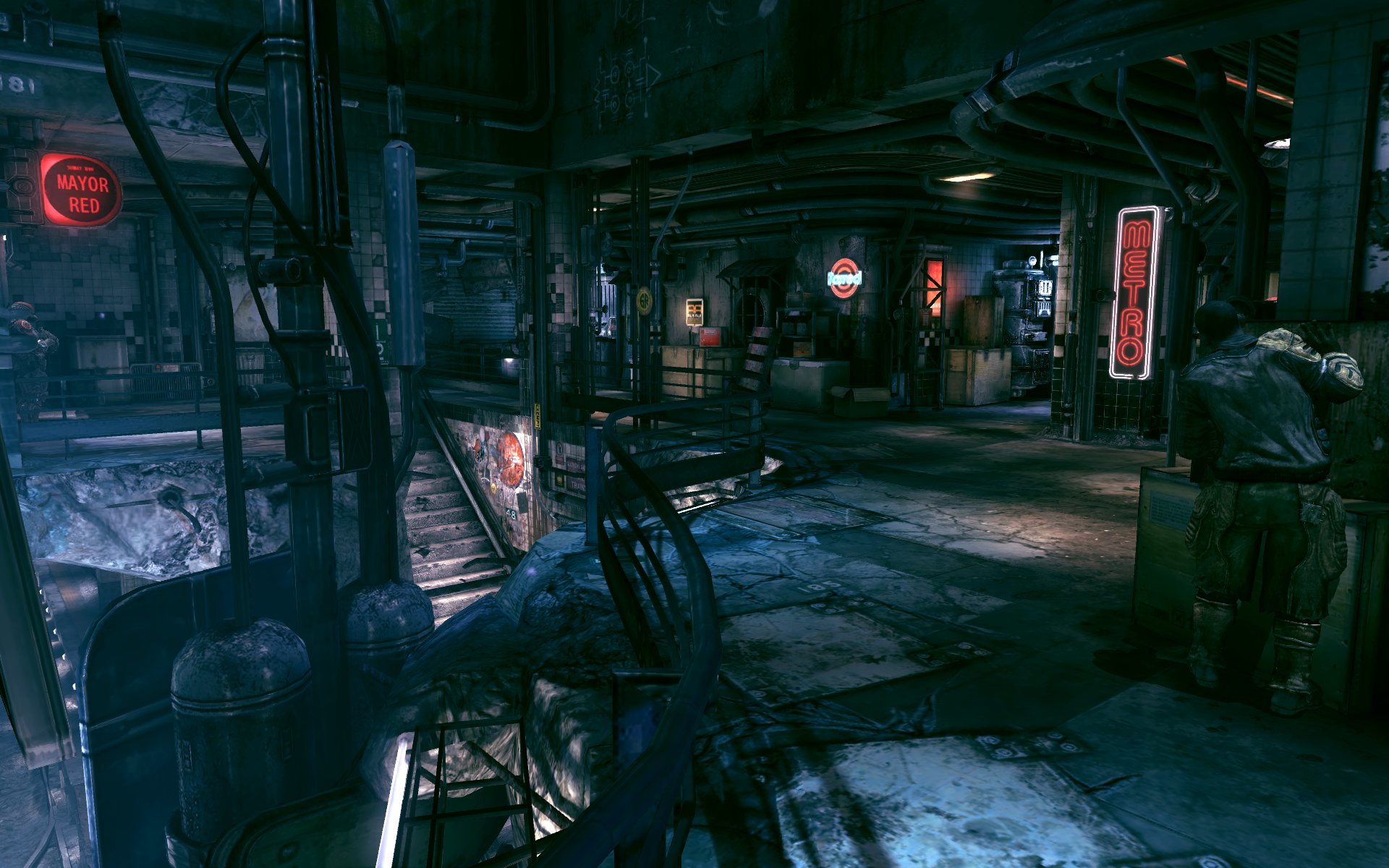 The game ran extremely well on my mid-range rig, and apparently runs at a steady 60 frames per second on both the 360 and PS3. I had some video configuration problems (v-sync refused to turn on) and the texture pop issues were occasionally present, but it was largely a seamless, quick-loading, and visually consistent trip.

So, that’s the good part.

As I said, I believe the gameplay in Doom, and nearly every FPS since, is more sophisticated than that of Rage. There is absolutely no variation at all, from start to finish. The only thing that changes are the guns you have and the amount of damage the enemies can withstand. Every mission is identical: get in your car, travel to a door in the wasteland, go through the one-way dungeon (there are almost zero forks or open areas), collect an item or kill someone, and then usually take a convenient shortcut back to the start. Rinse, buy ammo, and repeat about 40 times. 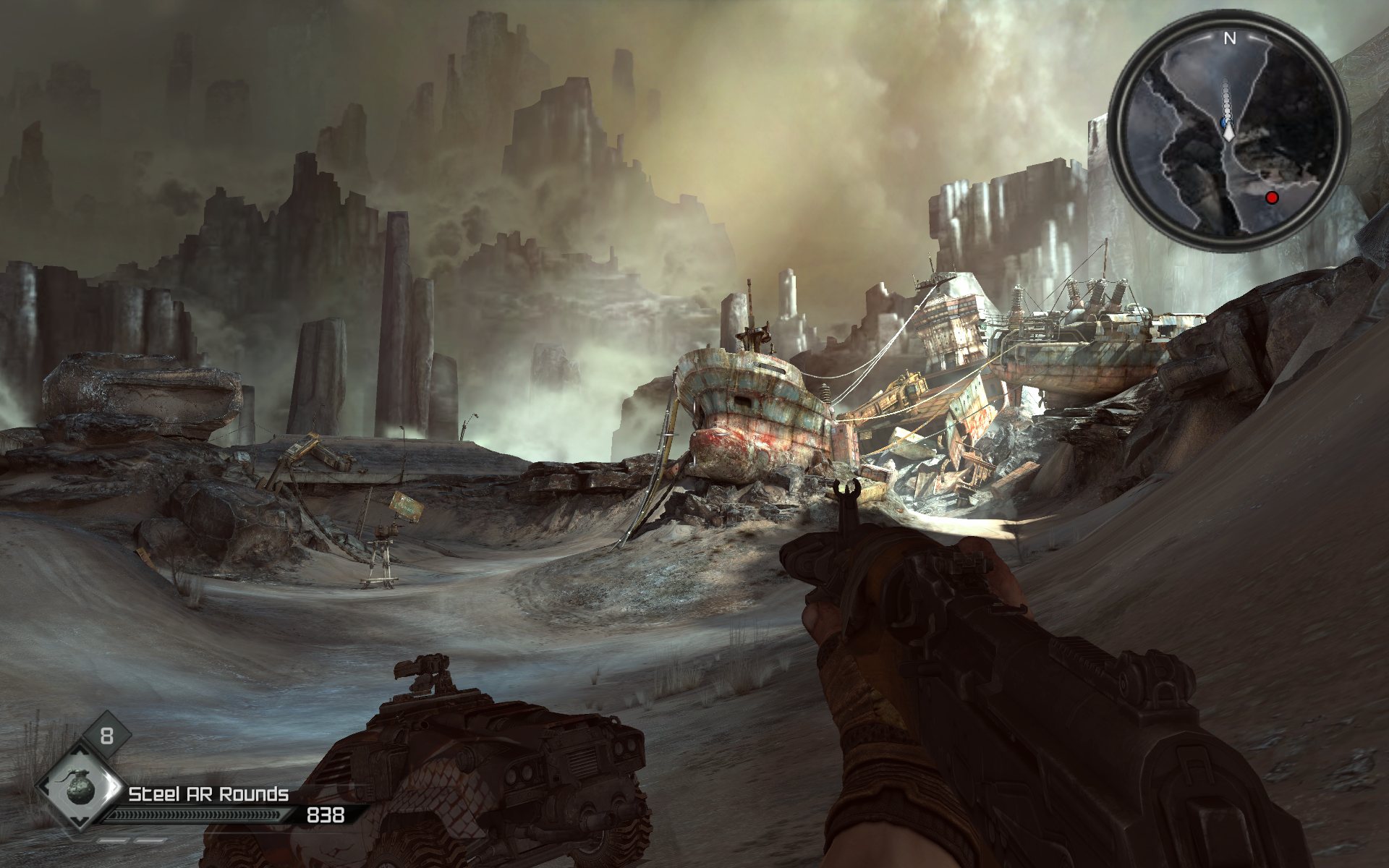 The last thing I mentioned always bugged me. You will literally take a mile-long path through dozens of buildings and corridors, and then, reaching your objective, find that it was actually only a flight of steps and a door from where you started. I realize not every game aspires to logical level design, but it felt a little ridiculous. Why not have the player come out the other end, steal an enemy car, and drive back to the entrance?

Progressing through these levels is the exact same every time, as well. Technically you can sneak, but the few times when you can actually take out a few guys without making a noise are scripted, with the dudes starting facing the wrong direction, and your killing them setting off the usual flood of baddies. You advance room by room, hallway by hallway, shooting and grenading these people the same way for hours. There’s no way to vary the combat — you can rush in and use the shotgun, sure, or hang back and snipe, but what if you want to drop down on some enemies below you, use your melee, and so on? Nope. It’s a bit ironic that throughout the whole game you can barely find a straight line (so detailed are the environments), except for the path of your character. There are side quests, but they generally just get you cash and follow the same rules.

With a few exceptions, every enemy in the game falls under two types: run wildly toward you to melee attack, or hide behind cover and lean or pop out to take a few shots. There are big guys, and some sniper types, and so on, but mainly it’s just these two kinds of guys (be they mutant, bandit, soldier, or what have you) with steadily increasing hit points. At the beginning of the game, a guy would drop from a single headshot with the default pistol. Towards the end, there were dudes taking shotgun blasts to the head and not slowing down. 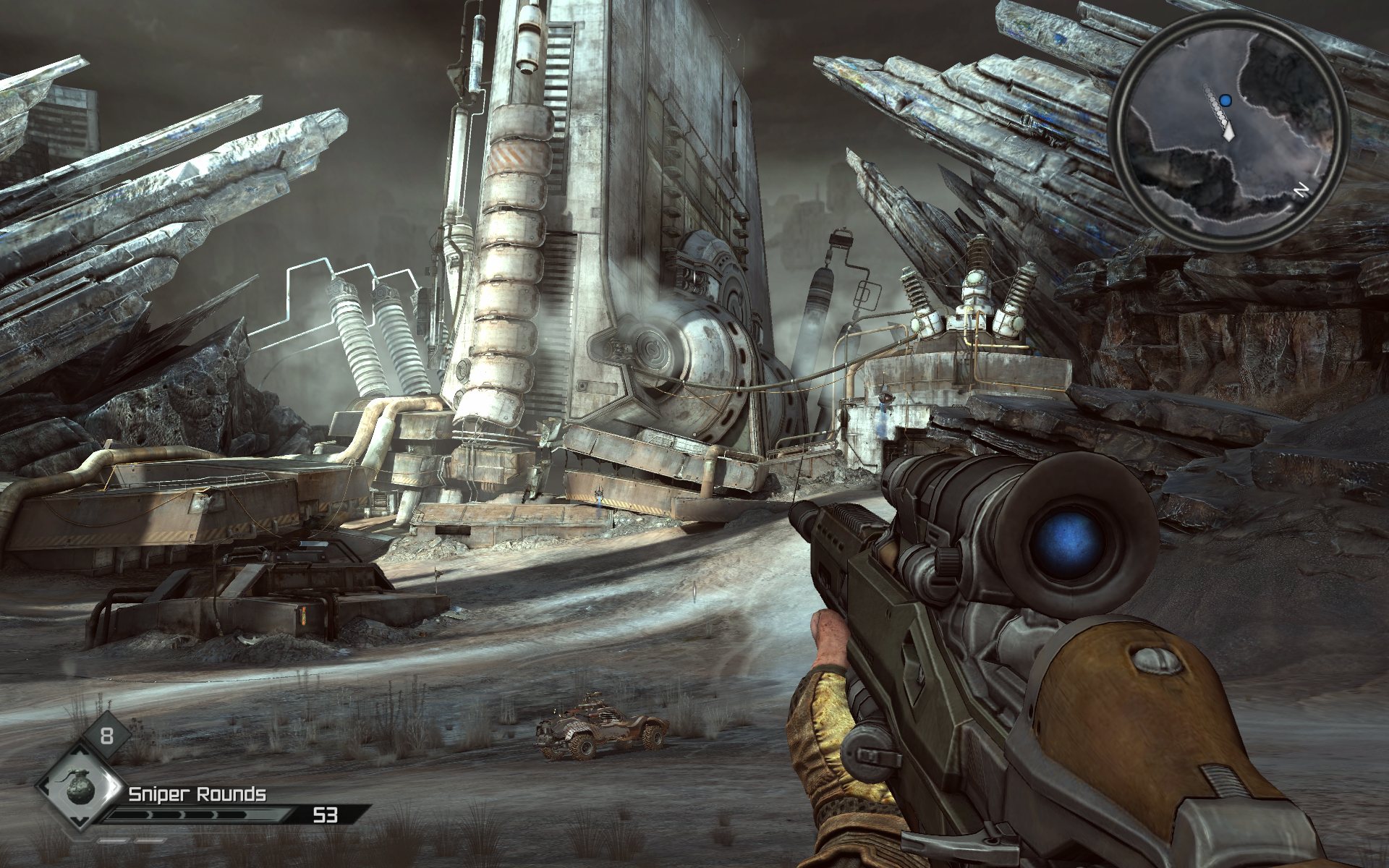 The weapons are standard fare, most with an alternate ammo or two that ups the damage. Pistol, shotgun, assault rifle, crossbow, better assault rifle, rocket launcher, plasma gun. You pull the trigger until the bad guys fall down. You can craft items and ammo, some of which are handy, like the sentry bot. But you’ll probably accrue hundreds of items in your inventory (which is not very easy to manage) that you’ll never use. And useless, sellable stuff (cans of food, “small objects” like mugs that are apparently worth more money than guns) is mixed right in with your ingredients and ammo. Why?

Slight spoiler warning for the next two paragraphs. The end of the game comes abruptly and is extremely unsatisfying. The fate of the free world, it seems, relied on a 20-minute traipse through an anonymous sci-fi headquarters and killing a couple dozen regular guys. Building and decorating this incredible world was too much work to provide a proper third act, I guess. Thought that is a fairly legitimate excuse.

The best part of the game was without a doubt the first trip into the dead city. The process of discovery as you progress deeper into the mutated, pulsating bowels of this genuinely scary and fantastically-rendered ruin is great, even if you’re not actually interacting with anything except to shoot it. There’s even a genuine boss fight! Unfortunately, nothing else in the game comes near this segment.

I’m not sure why there is driving in this game, except to give the world a little scale and shorten the time spent between dungeons. The actual races, fairly short affairs through familiar areas, with trivial differences, varied between tedious and frustrating. But they’re the only way to win currency to upgrade your car with, so you pretty much have to do it. I found almost no difference between the various cars except the look and the amount of armor they had. And you can only race with two of them. Seriously? 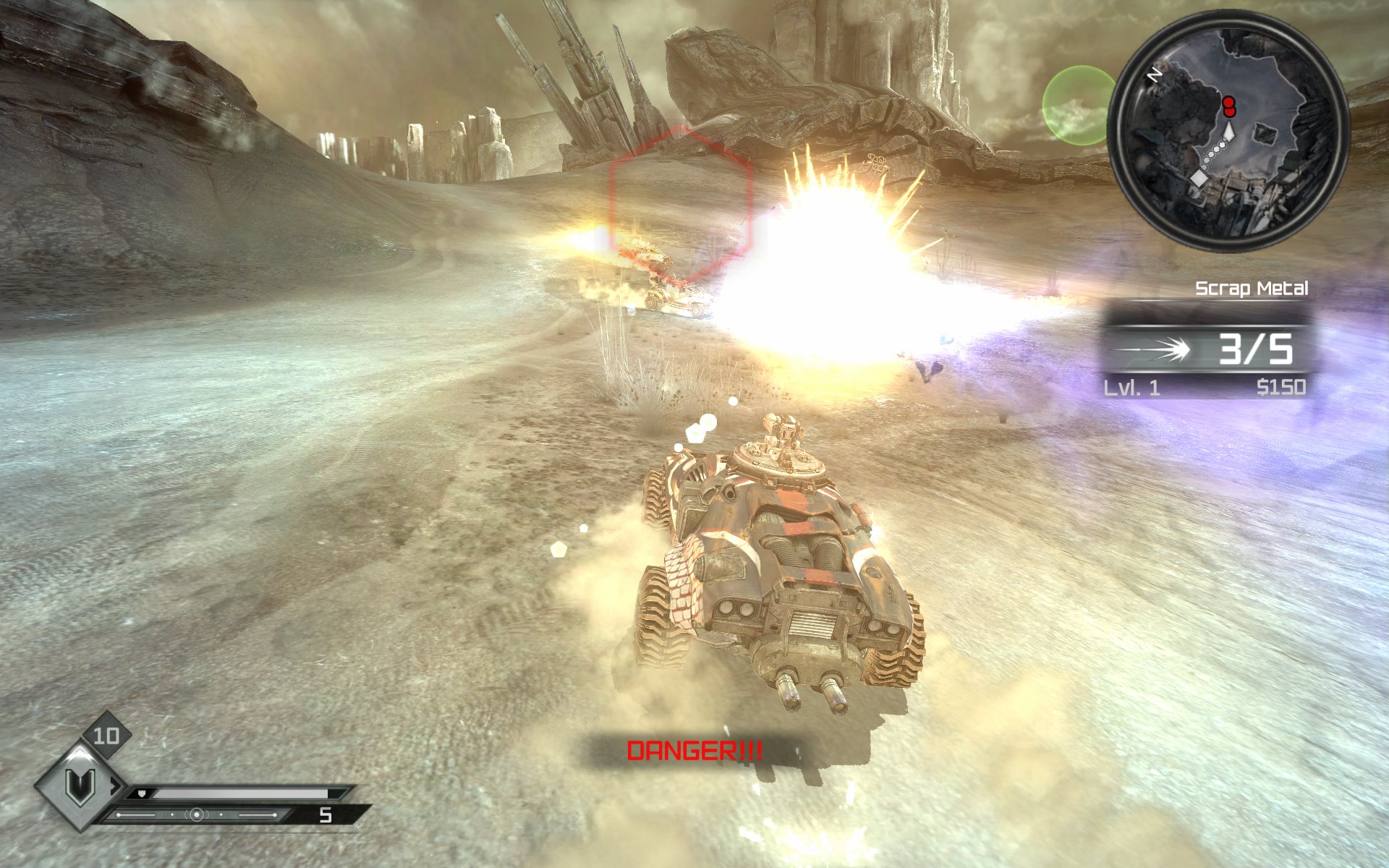 Vehicular combat is a pain. Because you usually encounter enemy vehicles in a largish arena type landscape, you tend to either destroy a guy in one pass or circle around each other, slowing down to a crawl in order to turn faster.

As far as adding size to the world, it’s a mixed bag. Occasionally you drive past some really cool stuff, but of course it’s just set dressing. But most of the destinations you travel to are literally within 30 seconds or a minute away. Need to go collect something from that old factory “up north”? Yeah, they could have walked there in five minutes.

Is it worth playing? Let me put it this way: you’ll get as much out of watching someone else play it as you would if you bought it. What you’re buying is more a cinematic and visual experience than gameplay you’ll value or remember on any level. How much are you willing to pay for a movie ticket? That’s how much you should pay for Rage.