At the Web 2.0 Expo in New York City this week, Yottaa, the startup that specializes in offering cloud-based web performance monitoring and analytics services, announced that it is now officially expanding into the speed optimization game as well, offering websites a quick and easy way to accelerate their websites. Yottaa is bringing its so-called “Site Speed Optimizer” out of beta to bring a relatively low-cost nitrous boost to the websites of SMBs.

Co-founded by chairman of Nexaweb, Coach Wei, the startup launched in September 2010 with its “Website Monitor” to enable SMBs to assess, benchmark, and monitor the performance of their websites. Shortly thereafter, Yottaa raised a $4 million series A round from General Catalyst and Stata Venture Partners. Since then, the startup has attracted over 60,000 businesses to its free products (like its Website Monitor).

But, to become a full-service web optimization tool for startups and small businesses, offering speed enhancement technology is a must for the startup to compete with fast-growing competitors like the awesome TC Disrupt finalist CloudFlare. Consider, too, that Amazon calculated that 100 milliseconds lost in site speed cost businesses 1 percent of their total revenues — and that Google found 500 milliseconds of delay to result in a 20 percent drop in traffic. Considering 400 milliseconds is about the speed of the blink of an eye, these seemingly small numbers can have a big effect.

Since more than 90 percent of the time it takes a site to load comes from simply displaying the site’s code, in other words its front end, streamlining the way in which a site manifests its HTML, JavaScript, and cascading style sheets (CSS) code becomes extremely important — especially when milliseconds matter. While eliminating the stuff that’s not integral to delivering the user-facing content quickly to the browser is at the core of speed optimization, today it’s really only enterprises and big businesses that can afford to do the work it takes to make this a reality.

Sites like Google may apply hundreds of techniques to decrease calls made to the browser to make its front end load faster, but SMBs generally can’t afford to hire the sizable team of engineers that this kind of optimization requires. 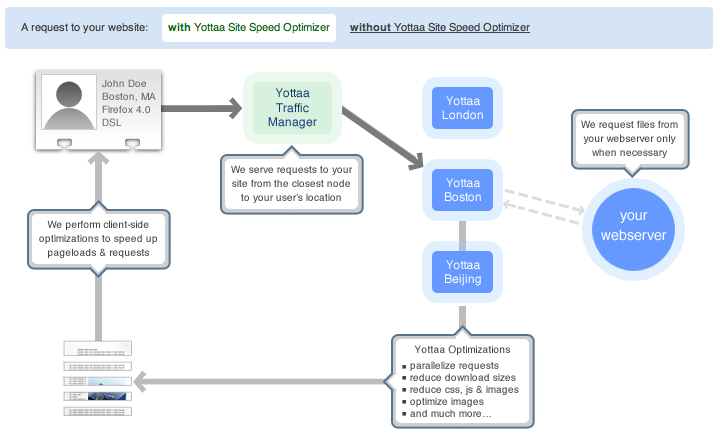 With its Site Speed Optimizer, Yottaa hopes to make this a reality by offering a cloud-based service that takes advantage of servers planted across the world to work as a proxy for the source website and make optimizations happen in realtime. The speed enhancing technology works towards not only caching content, but improving the rate of display of the actual content itself. So, beyond condensing the time a website’s code takes to be delivered, Yottaa is also using techniques that target the user’s individual browser, browser version, and device to help speed up the rate at which the content is rendered in the user’s particular browser. (Like using SPDY for Chrome users, for example.) Browser optimization: It’s the little things that make the difference.

As Lydia Leong, the Research VP at Garnter said in a statement, combining content optimization, edge caching, and network optimization is crucial to offering enhanced speed and performance to websites. “Next-generation content delivery networks have begun to combine all three types of optimization into a single service”, she said. “And a cloud-based approach to delivering such services can make them accessible to businesses that have not previously been able to afford a CDN or have not found a CDN to be cost-effective”.

Thus, for SMBs, being able to take advantage of Yottaa’s elastic multi-cloud network (and patent-pending cloud routing technology) that optimizes web pages in realtime using more than 100 methods (a la Google) is pretty neat, especially when the startup’s “Site Speed Optimizer” can be accessed in a free trial or by way of monthly service fees that start at $29.