Well if it isn’t my old friend the new Facebook app developer page … Yes that mysteriously up-to-date Facebook mobile developer page from a couple of weeks ago is officially live with an explanation of how the synchronized Facebook mobile platform will work across its iPhone, iPad, web and eventually Android apps (sometimes these things are so anticlimactic).

And, unlike the simplistic three-step tutorial (below) I was given when I downloaded the new Facebook iPhone app, this developer fact sheet has a bit more information about the motivation behind the changes.

From the looks of it the new mobile Facebook experience is centered around keeping app developers content and complacent on the Facebook platform. In an update released today, both the web apps and iOS apps now feature prominent icons for Friends, Messages and Notifications. In a nod towards developer symbiosis, Facebook is highlighting that Notifications will allow users to follow links to iOS or web apps if they are invited by their friends — In the same vein, users will be able to access apps by clicking on links in their News Feed.

The documentation also suggests that Timeline, another sign that Facebook wants to be the aggregator of all apps, will be coming to mobile soon.

Perhaps the biggest step towards making their developers feel all warm and cozy (and comfortable) in Facebook’s cross-platform mobile integration is Bookmarks, which allow you to navigate to an app from inside Facebook mobile. Bookmarks is a boon for developers seeking to increase virality; I’ve already downloaded one iOS app simply because it was bookmarked on Facebook (“Words With Friends”) and I’m figuring Facebook will drive enough app downloads that it will be able to charge affiliate fees. Facebook told Inside Facebook that their policy was not “to discuss such details.” 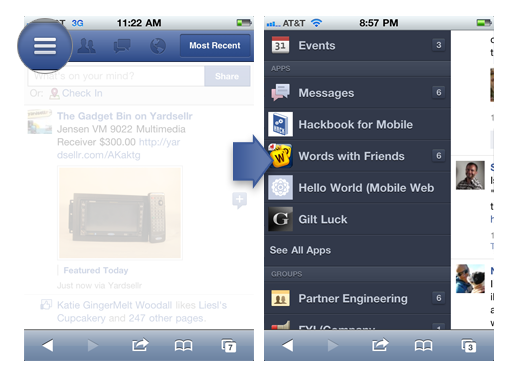 Perhaps the only thing about the new features that wasn’t entirely a developer plus was the stipulation that developers cannot use Facebook Credits on their iOS native or web apps, but even that too is mitigated by the fact that both Facebook and Apple take the same 30% cut — so devs are fleeced either way.