Some startups and apps (like Joypad and Brass Monkey to name a few) are turning your iPhones into customizable game controllers, while Wii and Kinect have turned you into the controller with their motion-sensing consoles.

You’ve heard it hundreds of times, but smartphone technology is advancing at an astonishing rate. Five years ago, video recording was still a novelty. Now, our phones can understand human speech, make reservations, and tell us our new shirt makes us look fat. Mobile gaming has evolved rapidly over the last few years as well, but most serious gaming is still done via the browser or home console etc., and all gamers could stand to take their gaming out of doors.

Riding the crest of smartphone innovation, and conceived as a way to get gamers off their couches, a new startup is opening its private beta today called Explorence, which is developing outdoor mobile games for Android — and soon for iOS. 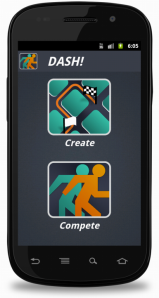 What does that mean? Simply put, through its mobile apps, Explorence plans to transform your outdoor recreational activities into interactive video games. The startup wants to turn your jogs into “The Amazing Race” and your bike rides into Mario Kart. Users create their own courses and experiences to compete against friends asynchronously. Explorence augments these outdoor activities with music, check points, leaderboards, rewards, as well as “fail conditions” to create an immersive gaming experience for your outdoor recreatin’.

For example, DASH!, the startup’s first title created using its technology, enables users to create, participate, and wager in races of any kind (asynchronously). First, a user creates a race via GPS by walking the course with smartphone or selecting start and finish areas. Users can then select how much virtual currency they want to wager on the race — at which point anyone who selects that race on the app gets to compete in that race, at the time or in the future.

Once you’re ready to go, the app will begin a countdown to start, a gun goes off, and you run your race (phone in pocket is probably a good idea). There’s musical accompaniment and sound effects udring your race, and once you cross the finish line you’ve created, the phone stops the clock and automatically enters your time onto its virtual leaderboard so you can see how you did compared to your friends.

The racers earn coins for participating (and more for victory), which will later be redeemable for game enhancements and real world goods. DASH! works with any racing discipline: driving, cycling, running, snowboarding, etc.

For the past 2 months, the Explorence team have been testing these time-shifted races, and its small set of users are already averaging 3.9 sessions (races or races created) per day. For gamers who love the outdoors, it seems to have the potential to become pretty addicting.

The key to Explorence’s technology and user experience lies in how the team has been able to use GPS, smartphone sensors, etc. to tweak geofencing around a particular point. For example, Explorence has two more titles in the pipeline, one of which will bring its technology to extreme sports — so that snowboarders for example will be able to put their phones in their pockets and go into the park to hit jumps and tricks. The apps will then measure distance, the amount of rotations, etc., giving them points and a soundtrack all the while.

There are already some augmented reality first person shooter (FPS) games out there, which essentially turn your smartphone into gun and let you blast away at your friends. The technology is still developing, to be sure, but we’re clearly at a point now where the functionality is ready to go mainstream. Whether users are ready to adopt — that’s another story.

The Explorence team, which consists of Mike Suprovici, Bill Gleim, and Mark Thompson, are graduates of the San Diego Founder Institute.

Today, DASH! is available in private beta on Android (and will be launching on both iOS and Android later this year), and Explorence is offering 500 invites for its beta, which readers can take advantage of by going to the startup’s website and entering “TechCrunch” into the “Access Code” field.

Check it out and let us know what you think.