It’s only been a few days since the launch of the official Google+ Hangouts API (application programming interface), but we’re already starting to see some interesting implementations make their debut. Case in point: online whiteboarding service Conceptboard has introduced a Hangouts extension that puts Google’s own newly integrated Sketchpad to shame.

The Google Sketchpad in Hangouts lets users draw, add shapes, text, lines, images and more into a basic blank document which can be saved to Google Docs.

Conceptboard’s Hangouts extension, however, offers a much richer implementation of shared whiteboarding. Essentially, the company has just packed its current online whiteboarding service into Hangouts, allowing users to freehand scribble, use drawing tools, import other files (including images, PDFs, Office docs), write notes, create tasks and take screenshots and share their screen area and cursor with others (i.e., presentation mode). 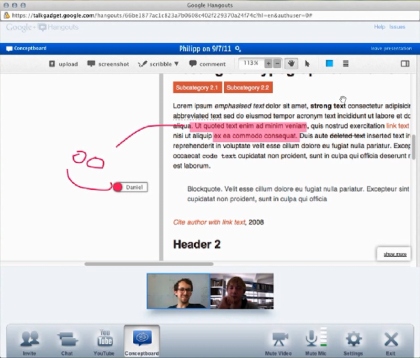 The boards are also available when the Hangout ends on Conceptboard’s website for those who create a free account and via a unique URL.

Most importantly, these boards are accessible to others who don’t have the extension, a Google+ account or the Chrome Web browser installed. The non-Google+ users can use Conceptboard’s online service to collaborate with the others instead.

Google+’s Hangouts API is still in testing, so Conceptboard’s Chrome extension is a “technology preview” for now. There may be bugs, but if you get hung up, you can contact the company’s support team here. The extension itself is available for free here on the Chrome Web Store.