The SDK for iOS launched in June, allowing mobile app developers to retrieve credit card information from cards held up in front of the phone’s camera. As of today, the company says that card.io is up-and-running in 80 iOS applications, with 750 developers in total having signed up for the service. 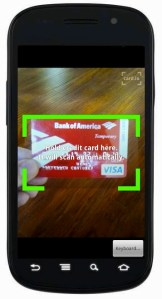 The idea behind card.io is to make the experience of paying for items on mobile easier and faster. Instead of having to manually type in your credit card information, including expiration dates and the CVV code from the back of the card on tiny mobile keyboards, card.io users simply hold up their cards to their phone to pay for purchases. The solution has appeal across industries, including everything from e-commerce to ticketing to daily deal apps to retail.

Among the 80 applications supporting card.io for credit card input are social payments platform Venmo, retail app Qthru, plus Newegg, Spotze, EventDay, Clinkle, TaskRabbit, Ambur, InvoiceASAP, BeagleApp, Floktu, WillCall and others. While we were hoping to see several more established applications jump on board with card.io right away, having 80 apps is nothing to sniff at, we suppose. And with 250 developers on board, card.io should become an even more prevalent option soon, at least in niche apps looking to gain traction.

Meanwhile, payments company Jumio recently launched a similar service that will work on both desktop and mobile, but uses its own payments network. (Card.io requires developers to use the merchant accounts they already have in place).

However, Jumio’s mobile app libraries for iOS and Android won’t go live until later this year, giving card.io the immediate edge in terms of availability. In the long run, though, Jumio’s will be the more complete solution. It will offer not just the scanning and card reading components, but the authorization, processing and fraud prevention features, too. Neither card.io nor Jumio is necessarily “better” –  it just comes down to what a developer needs.