When the first shots of the HTC Vigor started making the rounds, I offhandedly mentioned that the funky backplate and red trim made it look like a new entry in Verizon’s Incredible series. As it turns out, that hunch may have just been confirmed, as a recently leaked release indicates that a very similar device called the Incredible HD is slated for an October launch.

According to the details in the release, the Incredible HD is a new Verizon LTE device with a 4.3-inch screen, a 1.5 GHz processor, 1 GB of RAM, and support for Beats audio. Coincidentally, these specs match up nearly exactly to those leaked alongside the original Vigor pictures.

The release goes on to paint a very impressive portrait of the Vigor/Incredible HD: like the Runnymede, it will reportedly ship with a pair of Beats headphones, and the device will come with a whopping 48 GB of storage out of the box (16 onboard, 32 in a pre-installed microSD card).

As compelling as the image makes the Incredible HD out to be, though, some of the details just don’t add up. The release lists the Incredible HD as having a WVGA display, which comes out to a resolution of only 800×480 — hardly what one would call HD quality.

What’s worse is the fact that the spec listing contradicts itself: it mentions that the Incredible HD sports an actual “HD resolution of 1280×720” right after it lauds the phone’s WVGA screen. While it could be a simple typo (1280×720 is occasionally referred to as WXGA, though not usually in the context of a phone), it could also be the work of a rookie forger mixing up their jargon.

The Incredible HD, if real, looks to pack a real wallop when it supposedly ships on October 13. While it would certainly spice up the holiday season’s smartphone wars, the whole package almost looks to be too good to be true. 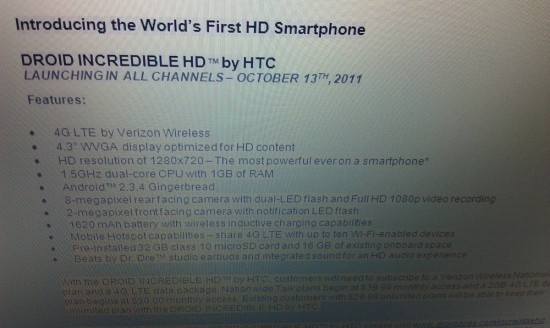