TechCrunch Disrupt Startup Alley participant ThingLink is a Helsinki, Finland and U.S.-based startup that lets you add rich media tags to online images. These tags appear as small dots when you hover your cursor over the image, and can link out to a number of services, including Amazon, iTunes, YouTube, EventBrite, Facebook, Twitter, Vimeo, Flickr, SoundCloud, Spotify, Wikipedia and many others. You can also choose to tag the images with just text or standard URLs, too.

These enhanced, interactive images can then be hosted online, on a website or blog, for example. Already, the format is proving popular with music labels, several of which are using ThingLink images on artists’ sites. 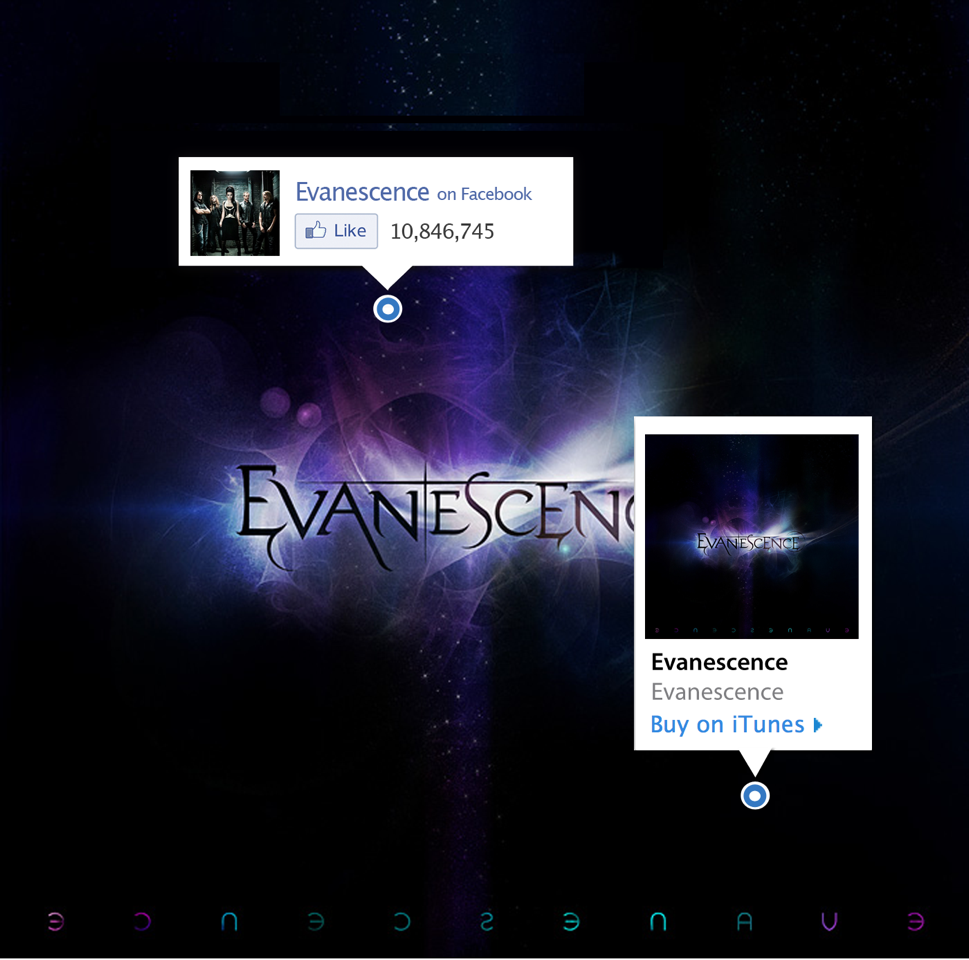 (Note: above image is for illustrative purposes only, not a  live ThingLink image.)

The startup was launched back in June of this year, but was showing off its concept in TechCrunch Disrupt’s Startup Alley this week. When I dropped by the booth, folks from a major movie studio were giving the startup a serious look. It’s not surprising. ThingLink’s sign promotes its high CTR’s (click-through rates) as a key selling point. CMO Neil Vineberg tells me that averages can be anywhere from 1.5% to 20%. In some campaigns, CTR’s were even as high as 50+%. Given that banner ads hover around 0.05% these days, says Vineberg, (or sometimes even worse, we should note), even the low-end of ThingLink’s scale would catch marketers’ eyes.

As noted above, ThingLink has already proved popular with content promoters, including several indie record labels, and most recently, music artist promoter TopSpin.  Explained TopSpin CEO Ian Rogers, “photos are a big source of traffic for artists, so it makes sense to attach links to artist offers and let those images travel the web.” (ThingLink has a deal in the works with another big company in music industry, but we can’t get into specifics at this time.)

Some the artists on ThingLink also use the image hotspots to allow users play music directly from the photo itself. To play a track, it’s as simple as clicking the dot then clicking the play button that shows up in the small pop-up overlay.

The hotspots on ThingLink images can be associated with affiliate accounts, when viable, such as Amazon’s affiliate program, for example. And on the back-end, a real-time analytics engine tracks image and tag-specific views, hovers and clicks, helping promoters evaluate the successfulness of their campaigns. Images are embeddable and shareable (via Facebook, Twitter, email, direct link), and the tag editor is simple to use, too.

Music labels aren’t the only companies interested in the technology. ThingLink has a showcase of examples for commerce, fashion, design, education and social connection. And the U.K.-based news outlet The Guardian uses ThingLink, as you can see here.

Thinglink has received around 2 million Euros in early-stage funding from European investors Inventure and Lifeline Ventures, as well as TEKES, the Finland Funding Agency for Technology and Innovation. Several former Nokia engineers have also found a new home at the startup, we hear.