Three days and 31 startup pitches later, the winner of TechCrunch Disrupt San Francisco 2011 has been determined. Out of the 29 startups and two audience choice winners, we whittled the list down to seven finalists, which included Bitcasa, Cake Health, Farmigo, Prism Skylabs, Shaker, TalkTo, and Trello. The winner from this group receives the Disrupt Cup and $50,000, taking over possession from Disrupt New York winner Getaround. Without further ado, the runners-up is Prism Skylabs. And the winner is…Shaker! Disclosure: TechCrunch founder Michael Arrington is an investor in Prism Skylabs and is a pending investor in Shaker.

Israeli startup Shaker essentially aims to turn Facebook into a bar via a social game. As we wrote in our review of the startup, Shaker is a mixture of Second Life, The Sims, and Turntable.fm all mixed together using your Facebook data and connections. Your Facebook profile becomes a walking avatar, your pictures are placed on an virtual wall, you can choose what music is playing in the room for everyone to hear and you can even buy people drinks.

Shaker takes basic social gaming a step further by allowing users to meet new people (as opposed to playing the game with existing friends), which replicates the experience of being in an actual bar. Shaker looks at profile information to show what else you may have in common with seemingly random people in the room. For example, you may have the same birthday as someone. Or you may both like the same movie or band. Other elements include proximity based chat, a Tweet wall, and a “smart phone” social discovery tool to look up information about people in the room.

The startup, which has raised $3 million in funding, is already seeing pretty good traction. The game received 80,000 MAUs in a matter of weeks, and had to block invitations. People were complaining that the bars are too crowded, and users were spending impressive amounts of time within the app. Without any PR, the game was able to attract attention and the startup had to shut down invites to 540 people. 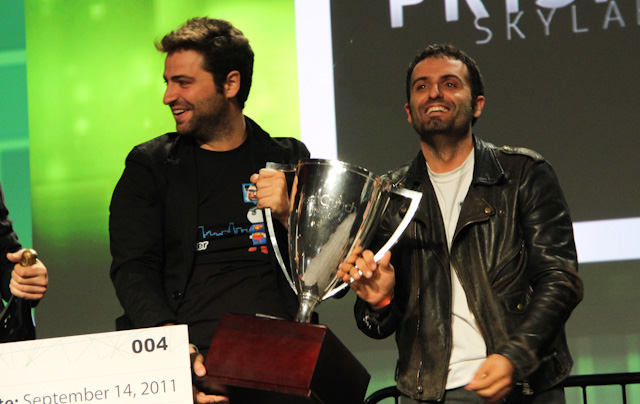 Runner-up Prism Skylabs is a cloud-based service thats allow business owners to bring video feeds online, capture images from these feeds and share this data with consumers and the public. The startup allows a business to download a free software that detects cameras or video on a network, showcases a number of images of the space to the business. Similar to the way you can pull images from videos using a video editing software, Prism Skylabs pulls relevant images of your establishment and builds insightful visualizations from these photos, while protecting customer privacy. The company is backed by SV Angel, Yuri Milner, Eric Schmidt, Aaron Patzer, Brad Garlinghouse, the CrunchFund and others.

The audience choice winner, which is presented by NEA partner Patrick Chung, is Vocre, which is a translation app. Vocre allows you to speak into the app while your iPhone is vertical, flip the phone horizontal and the phone’s accelerometer cues the app to translate and speak what you’ve said into the language of the people you’re speaking with, and they then can respond, rinse, and repeat.

Peter Relan, chairman of Sibblingz, presented an award for best mobile game to Fortune Planet, a project created at the Hackathon a few days ago.

MicroStrategy distributed two awards: The best mobile app went to Vocre and best use of social data went to Wondershake.