Today’s TechCrunch Disrupt audience choice winner was digital business card sharing app CardFlick, a recently launched iPhone app that allows you to trade contact info either with other people who have downloaded the app or via email.

Founder Ketan Anjaria tells me that what sets the app apart from competitor Bump is that it goes beyond data exchange, “We’re about personal brands, we’re democratizing design. Plus Bump doesn’t work very often.” With CardFlick you login in with Facebook and the app will manually import your contact information, morphing it into its various designer digital card themes which you can then share with people nearby via the Flick tab on the app or via email.

Once you’re in proximity, CardFlick will send a request to the user you share your card with, and that user can either accept or reject your card, which functions as a CardFlick friend request. Any contacts collection on CardFlick is cloud-sync’d, so even if you delete the app and reinstall your contacts remain unscathed.

The app has been in private beta since July, but went live as a 99 cent paid app in the App Store this Wednesday clocking in over 1,000 downloads in its first couple of days. After the app was set to free on Sunday, it’s seen over 7,000 downloads. As evidence of its virality, Anjaria reveals that the top users in the beta have each invited about 30 people to CardFlick and that when an email is sent out (because a user doesn’t have a CardFlick app) it has an impressive average click-through rate of about 60%. 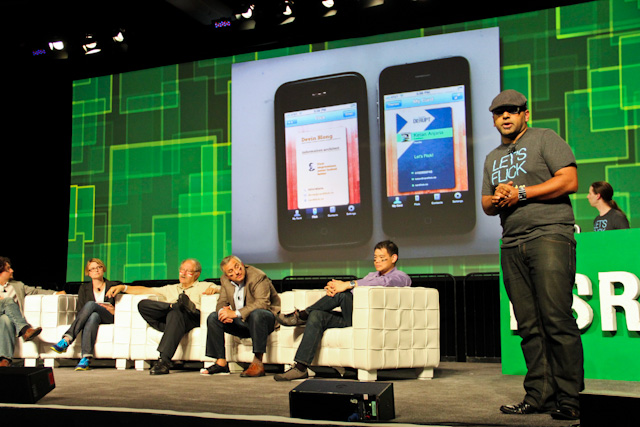 Anjaria wants to eventually provide analytics for CardFlick users, i.e. letting you know how many times the information on your card was clicked. He hopes to monetize the app by offering by offering in-app purchases for different themes and a subscription model for companies buying in bulk.

In the immediate future, Anjaria will be releasing CardFlick for Android, Windows Phone and Blackberry, partnering up with conferences and fixing the Facebook Connect problem that has ailed the iPhone app for the better part of tonight. Oh and killing off print business cards, “It’s 2011 why are people still using business cards,” he laments.

Q: Okay I like it, it has a good chance of being viral. It’s simple, easy to understand, “You create a business card the way you want to present yourself.”

WC: I like it, only problem is the other person has to have an iPhone.

A: User acquisition is crucial.

MS: The design looks awesome. I don’t think this one idea is a huge company. You look at Bump, and they’re now pivoting into being a social network. If you finally get people Flicking, think about the second act.

JG: Default experience is that it should know whether a user has the app or not.

A: We’re working on it it. We launched as a paid app switched to free on Sunday, had 7,000 downloads afterwards.