Editor’s note: James Altucher is an investor, programmer, author, and entrepreneur. He is Managing Director of Formula Capital and has written 6 books on investing. His latest book he’s giving away free. He built and sold Reset, Inc in 1998 and Stockpickr.com in 2007, among others. You can follow him@jaltucher.

Some people could be good at both. But I think it’s very hard. By definition. When you’re a salesman you want the other guy to say “yes.” When you’re a negotiator you have to be willing to say “no”, regardless of what the other side says.

So although they aren’t total opposites, the goals are completely different. But big picture:

Negotiation is worthless. Sales is everything.

Why? Because when someone says “yes” to you, you are in the door. Eventually then, you’ll get the girl in bed (or guy, whatever). If you negotiate right at the door, then you might have to walk away and try the next house. That takes time, energy, and still might not work out.

Some examples of my bad “negotiation” that have worked out for me.

A) I sold my first business for much less than other Internet businesses were going for at the same time. But it was 1998, the Internet was about to go bust, but first all the stocks went up.  Many businesses in the same category held out for more and ended up going bust. Even the guys who sold for a lot more, went broke when they didn’t sell their stock.

B) I gave 50% of my second company, Stockpickr, to thestreet.com for no money. Blog posts were written about how bad my deal was. But when someone owns 50% of your business, they care about what happens. They had to buy my company four months later rather than risk someone else owning 50% of it. For companies they only owned 10% of, they gave up on them. I was able to sell about four months before the market peaked. After that, it never would’ve happened. My one employee quit on me because he was so disgusted with the deal I did. [See, How I Sold Stockpickr, Osama Bin Laden, and the Art of Negotiation]

D) I got my old company to do websites for New Line Cinema for $1000 a movie. That was 1/200 what we got for doing “The Matrix” even though some of the sites were the same size. Why did I do that? The best designers wanted to be hired by us to work on those movies. Meanwhile, they stayed late on Saturday night to work on Con Edison sites that paid a lot better. I didn’t negotiate at all.

E) I gave away my last book for free and also sold it on the Kindle for $0.99 instead of a higher price. But this got my ideas out more and 20,000+ people have downloaded the book. See the above link for how to get the book for free.

F) I get offers every day to advertise on my blog. I say “no” to every one of them. Not my big picture.

The key is, only negotiate with people you really want to sell to. Else it boils down to money. Someone recently wrote to me that they wanted me to speak in Copenhagen. I didn’t want to go. So I said, “50,000 dollars.” I priced it so far out of a reasonable range that if they said, “yes”, I would’ve been happy to take it. I never heard back from them. That was fine for me. But if I really wanted to do it I would’ve done it for much less without even negotiating. Sometimes when you are selling to someone you don’t love and you price yourself way out of range, sometimes they say “yes”. That’s fine also. That’s the only thing I know about negotiation.

You don’t want to be stupid. Only sell something you love to someone you love. Always think “what is the bigger picture here?” In many cases in the bigger picture, the negotiation is not as important as the “sale”. Hence, the rise of models like “freemium”.

1) Ask what’s the lifetime value of the customer? When I give away a book for free. It gets my name out there. That has lifelong value for me that goes way beyond the few dollars I could maybe charge.

2) Ask, what are the ancillary benefits of having this customer? When we did Miramax.com for $1000, we became the GUYS THAT DID MIRAMAX.COM! All of that helped get 20 other customers that were worth a lot more. I would’ve paid them money to do that site.

4) Give extra features. Do the first project cheap. And whatever was in the spec, add at least two new cool features. This blows away the client. Don’t forget the client is a human, not a company. That human has a boss. And they want to look good in front of their boss. If you give them a way to get promoted, then they will love you and always hire you back.

5) Give away the kitchen sink. One of my biggest investors in my fund of hedge funds had just been ripped off in Ponzi scheme. They almost went out of business. I introduced them to reporters at every newspaper to help them get the word out about the Ponzi scheme. They were infinitely grateful and even put more money in my fund. Whenever the main guy was depressed about what had happened I would talk to him for an hour trying to cheer him up. I wasn’t just an investment for him but a PR person and therapist. Go the extra mile.

6) Recommend your competition. Think about it this way: what are two of the most popular sites on the Internet: Yahoo and Google. What do they do? They just link to their competition: other websites. If you become a reliable source then everyone comes back to you because your knowledge has value and they can only get that by having access to you. They get access by buying your product or services. [See, 10 Unusual Things I Didn’t Know About Google, Plus my Worst VC Experience Ever]

7) Idea machine. There’s that phrase “always be closing”. The way that’s true is if you are always putting yourself in the shoes of your client and thinking of ways that can help them. When I sold stockpickr.com to thestreet.com the superficial reason was that they wanted the traffic, community, and ads my site generated. The real reason was that they needed help coming up with ideas for their company. I was always generating new ideas and talking to them about it. Often the real reason someone buys from you is not for your product but for you. 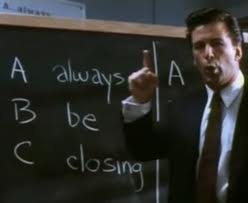 8) Show up. When I wanted to manage some of Victor Niederhoffer’s money I read all his favorite books. I wrote articles for him. At the drop of a dime I would show up for dinner wherever and whenever he asked me to. If he needed a study done that required some programming beyond what he or his staff was capable of doing, I would offer to do it and would do it fast. Nobody was paying me, but ultimately he put money with me (at ridiculously low fees but I did not negotiate), which I was able to leverage into raising money from others. Plus, I really liked him. I thought he was an amazing person.

9) Knowledge. When I was building a trading business I must’ve read over 200 books on trading and talked to another 200 traders. No style of trading was off limits. This helped me in not only building a trading business, but building a fund of hedge funds, and ultimately building stockpickr.com. I knew more about trading and the top investors out there than anyone else in the world, I felt. Creating value was almost an afterthought. When I was building websites I knew everything about programming for the web. There was nothing I couldn’t do. And the competition, usually run by businessmen and not programmers knew that about me. And knew that I would always come in cheaper than them.

10) Love it. You can only make money doing what you love. If you work a nine to five job that you hate then you’re on a leash and you’ll only make enough to get by and you won’t behappy. If you love something, you’ll get the knowledge, you’ll get the contacts, you’ll build the site with the features nobody else has, you’ll scare the competition, you’ll wow the customers.

I didn’t enjoy writing finance articles. I’d write a finance article for some random finance site and then repost this on jamesaltucher.com. I had zero traffic.

Then I decided to write articles I enjoyed. To get back to my true roots where I loved writing and reading. I also lwanted to really explore all of my failures, my miseries, my pain. In public. I love being honest and intimate with people. I love building community. I love emailing with readers. That was about 10 months ago I decided to make the shift where I was just going to open the kimono at jamesaltucher.com and say everything I wanted to say, and at the same time indulge in my love of writing, art, creativity, and reading. 2.5mm+ “customers” later I’m enjoying more than ever doing what I love.