A rocky financial climate isn’t stopping this IPO—Chinese online video site Tudou has started trading on the NASDAQ this morning under the symbol ‘TUDO.’ Last night, Tudou priced its shares $29 a piece, raising $174 million in the offering. This morning, Tudou opened 13 percent below its pricing at $25.11 per share, giving the company a valuation of $2.8 billion (as opposed to $3.2 billion at $29 per share)

Founded in 2005, Tudou is more Hulu or Netflix than YouTube. The company, which has raised $126 million from General Catalyst, IDG Capital Partners, and GGV Capital, hosts over 40 million videos viewed by over 200 million unique visitors a month. This morning, CEO Gary Wang told us that this site is serving 40 percent of China’s total online population monthly. 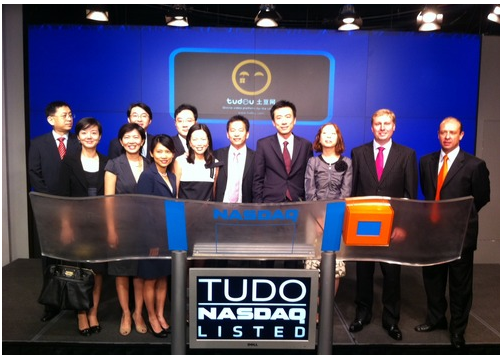 Wang tells us that the reason behind the IPO is to raise funds for content acquisitions as bandwidth charges. Being a Hulu-like video platform in China poses many challenges says Wang. First buying premium content is expensive and Tudou wants to bring fresh, premium content to its massive online audience. Additionally, Tudou is working with a large number of content owners to negotiate licensing deals.

Unlike Hulu, who features English and U.S. content, Tudou is negotiating with U.S. studios and media companies as well as dozens of premium content providers in China, Korea, Japan and other countries. The Chinese audience craves a large variety of global audience says Wang, and the company needs to come to agreements with all of these providers.

With this large amount of content, the movement towards HD videos and increasing traffic, the company needs to invest in bandwidth as well to sustain the platform. Of course, mobile is also a huge part of Tudou’s strategy and the funds raised in the offering are sure to be used in additional mobile development efforts.

It could be a sign of the economic times that Tudou is trading below its pricing in opening trades. That’s something we haven’t seen with recently public companies like LinkedIn, Pandora, Yandex, HomeAway and others, which all saw a significant pop in opening trading.