Researchers at UCLA have created a twist on traditional LCDs that would allow displays to reclaim wasted photons from the backlight, or even act as a normal solar cell. Normal LCDs rely on an always-on backlight, but because of the way LCDs work, most of that light never escapes. This inherent inefficiency hasn’t stopped us from getting bright displays, but the power necessary to make them so is usually what runs down your battery. 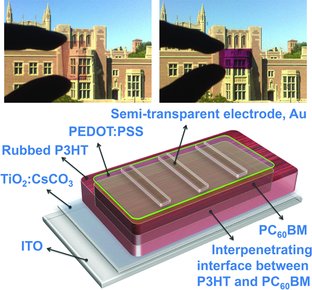 Enter UCLA materials science professor Yang Yang and his team of engineers. Among the layers of the LCD are two polarizing sheets that block unwanted backlighting depending on their configuration. The team at UCLA has designed a new type of material for these layers called a polarizing organic photovoltaic film. Instead of simply blocking the light, it would act like a photovoltaic cell and reabsorb some of the light’s energy — whether it’s coming from inside or outside the device. Essentially it would recycle the light from the backlight while simultaneously acting as a solar cell.

No guarantees are made regarding things like battery life and power draw, since these depend on many other factors, but Intel’s Youssry Botros commented that it could “potentially harvest 75 percent of the wasted photons from LCD backlight and turn them back into electricity.” Make your own calculations. He later uses the word “synergetic,” by which I think he means synergistic, but to be honest his version sounds better.

Yang hopes to work with manufacturers to make this mainstream, and says that the method is “simple.” All the same, don’t expect your phone to charge itself using this method any time soon. The research, published in the journal Advanced Materials, was conducted with money from Intel and the Office of Naval Research.