Apple makes a lot of things remarkably well. Cables… are not one of those things. Up until Apple overhauled their laptop chargers to this latest revision, I was inadvertently destroying one every 3-4 months — but that’s nothing compared to how many iPhone cables I’ve chewed through. Really: I could probably use my pile of retired iPhone cables to knit you a very stiff, uncomfortable hat.

I figured I was just particularly hard on my cables — I do travel a lot, after all. Turns out, I’m not the only one. After just a week or so in the world, a Kickstarter project for a super simple iPhone cable protector has already found a venerable army of backers.

For those who haven’t had to deal with a self-destructing iPhone/iPad/iPod cable, here’s the problem: they fray. Bad. It’s just something about the design of where the end connectors (be it the dock side or the USB side) meets the cable shielding. After a few weeks (with lots of being wrapped up and rolled out, of course; if you just leave it on your desk all the time, your cable is probably pristine), they begin to separate ; after another few weeks, the wires will be mostly exposed. Within a few months, the wires will likely just give out. Apple has made subtle changes to the design of these cables a few times, but the problem never really seems to go away.

This Kickstarter project, the “MySaver”, kills the fray by… well, by making the end connectors suck less. By wrapping the entire end bit in soft, flexible silicon and increasing the size of the end caps, the MySaver reduces the amount of strain placed on the connector’s weak spots.

The MySaver comes in two flavors: a DIY, snap-on solution for your existing iPhone cable, which they hope will retail for $11 (Kickstarter backers get it for $8), and a pre-made replacement cable which they’re planning to sell for $25 (with backers getting it for $19. Early backers got it for $10, though that tier is now sold out.) 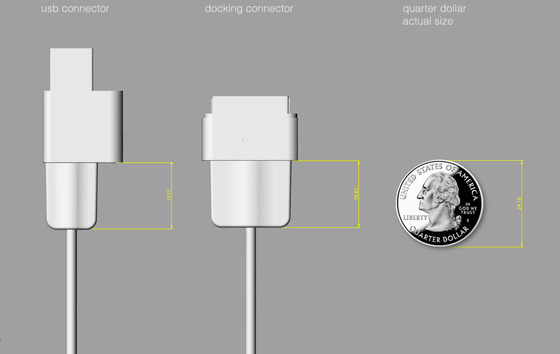 Think I’m just being too hard on my cables? In the just over a week since launching, the project has already found 274 backers, and raised $7,500 of their $15,000 goal. While that’s no ridiculous landslide like the TikTok Nano watch, it’s certainly a much better start than most projects get.

Ready to kick down a few bucks to end the fray? You can find the Kickstarter project right over here.

(With all that said, lets not stop hoping that Apple follows through with their pledge to support microUSB before too long)