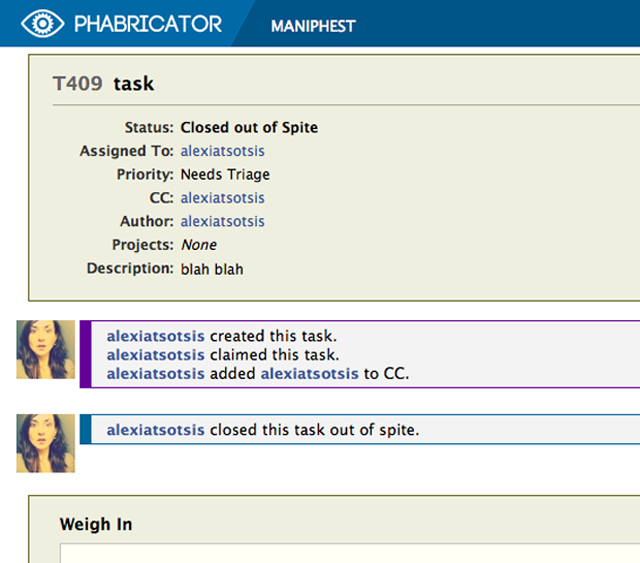 While Evan Priestley says his greatest accomplishment is launching photo faxing to TechCrunch in 2009, many in the startup community hold that it’s Phabricator – a set of open source developer applications that Priestley and others built while inside Facebook and that he intended to take on as a hobby while he looked for something else to do, after leaving the social network earlier this year. Instead the coding workflow tool took off.

Phabricator seems to have gotten some pick up among smaller startups (over 500 engineers use it daily) mostly because of its speed, usefulness and simple Facebook -reminiscent interface designed by Priestley. It doesn’t hurt that its copy, also written by Priestley, is sort of snarky and hilarious.

I mean, I’m no coder but even I think Phabricator is kind of cool, mainly because of creative writing like ‘Facebook engineers rave about Phabricator, describing it with glowing terms like “okay” and “mandatory”’ on its intro page, the fact that you can close a task “out of spite” and small details like how the word “submit” has been switched out in favor of “clowncopterize.”  Love.

Priestley tells me that startups like Asana, Quora, MemSQL, Mixtent and SnapGuide are currently using the product as part of their development process, with Facebook bringing more and more of its code on to Phabricator as well. SnapGuide co-founder Steve Krulewitz actually registered the domain name Clowncopterize.com in homage to the service (just click on it, you won’t be sorry).

Among its most user beloved features are Maniphest, a bug tracker/task management tracker and Diffusion, a source code browser. The entire suite of applications also includes Differential, a code review tool that allows developers to easily submit reviews to one another via a command line tool called Arc when they check in code using Git or Subversion, Phriction a wiki tool which integrates more and more with Maniphest, and a slew of other products, all designed and described in Phabricator’s unique voice.

When asked if there was any other product out there like Phabricator (lame question I know, but it’s my job), Priestley said “It’s kind of tricky, since parts of it are like lots of other stuff. It just brings a wide array of tools together and integrates them tightly – normally, you have to install a lot of different pieces of software to get the same capabilities and the different parts do not necessarily talk to each other easily or well.”

Priestley says that future plans for Phabricator’s are “pretty fuzzy” and is focusing on building new features and fixing things. “We’ll see where it goes from there,” he pondering, going on to say that he’s considering some kind of SaaS thing in terms of monetization potential. I don’t know if that’s a joke.