TechCrunch Disrupt finalist CloudFlare is teaming up with realtime website translation service Smartling to allow users to translate their websites into any language. As you may know, CloudFlare offers a service that protects websites from online threats, promises and increase in page load speeds, and more.

Smartling offers a large, scale SEO-friendly realtime translation service for websites. The company has a hybrid model which allows you to pick between professional translators, machine translations, and crowdsourced translations.

Now Smartling will offer an app to all Cloudflare users that enables these translations along with securing and stabilizing their site. This is the first partnership of this kind for Smartling, which has helped Foursquare, Survey Monkey and Scribd translate their sites. In fact, Smartling’s cloud-based platform is now being used by CloudFlare to translate its website and application into 27 languages to start. The German, Indonesian, Portuguese and Norwegian sites are well under way.

Smartling just raised $10 million in new funding. CloudFare recently made waves when it was revealed the security service was being used by infamous hackers LulzSec. And CloudFare just announced a $20 million round of funding. 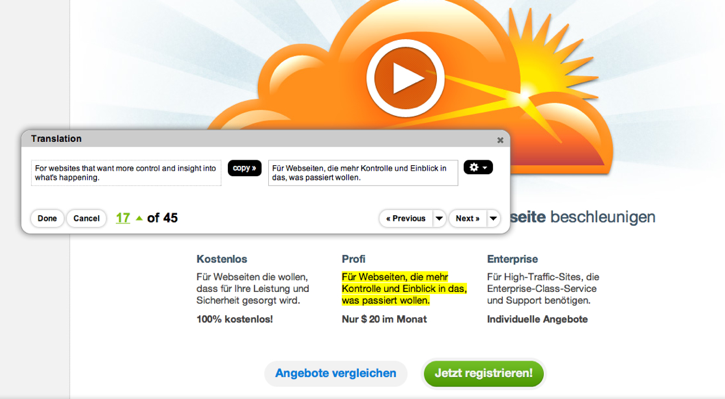