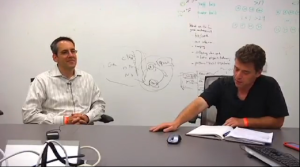 Thus spoke Howard Hartenbaum, a partner at August Capital, when he sat down with me last week at our Mobile First CrunchUp event in Palo Alto. For Hartenbaum, who admitted to being “tired” of being pitched “social” start-ups, mobile is the inevitable future of digital businesses – so inevitable, indeed, that he thinks the word will eventually disappear because it will become so ubiquitous.

Hartenbaum is unambiguously optimistic about monetizing mobile. He believes that mobile will revolutionize the traditional desktop advertising industry, replacing banner advertising with much more intimate and targeted advertising. He is also bullish about mobile as a provider of entertainment and as a commerce enabler. Most encouragingly of all, Hartenbaum believes that mobile is resulting in consumers paying for their content – thereby resulting in writers, musicians and filmmakers once again being able to monetize their work.

Why he’s tired of “social”