So let’s say you walk into a Best Buy looking for a new tablet. You walk up to the guy in the blue polo and tell him what you’re looking for. After taking you to the tablet section, he whips out a handkerchief and blindfolds you. “They’re all really good!” he promises. “The one on the left is $499, the one in the middle is $549, and the one on the right is an even $600. Which can I wrap up for you today?”

It sounds ridiculous, but that’s essentially how you’ve been shopping around for Internet service providers: blind as a bat, unless you want to trust their ads. But now, for the first time ever, the good old FCC has compiled data from 9,000 average Joe Americans over the course of a month. The goal: to gauge the speeds offered by ISPs in the real world, not just in their advertisements. 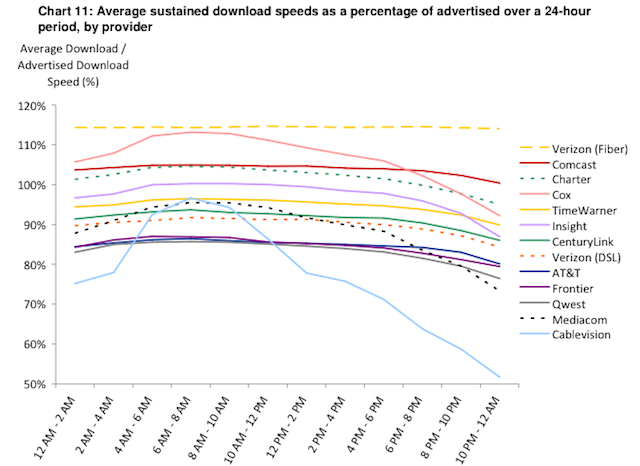 It’s entirely unnecessary to get into all the math of this report. Instead, I’m going to hit you with some of the key takeaways so we can all be smarter shoppers. Note that this doesn’t include other statistics, like uptime, customer service, cost, and so on. It really focuses more on the difference between ISP’s actual speeds vs. advertised speeds — obviously valuable data.

First, Cablevision seems to have more subscribers than it can handle. The company scored lowest among all ISPs by a rather large margin. Over a 24-hour period, CableVision’s average download speeds clocked in at less than 80 percent of the speeds advertised. During peak hours, the ISP barely broke the 50 percent mark of its promised speeds. AT&T, MediaCom, Qwest and Frontier also had trouble living up to promised speeds, though none were quite as taxed as CableVision.

On a happier note, Verizon Fios customers should feel totally proud of themselves. You’ve made a wise choice. Fios’ average real-world speeds were actually higher than advertised speeds, both over a 24-hour period and during peak surfing hours — as it’s a new service, it’s hard to say whether it’ll stay that way, but the numbers are hard to argue with. Other high-ranking ISPs include Comcast and Cox.

Here’s the best news of the whole report: a report exists. Before this it was difficult to separate the lies from the truth. Now it’s all mapped out for you, nice and neat. And don’t be afraid to fight for what you pay for. If your ISP consistently delivers speeds slower than what they’ve promised, do a little testing, mark it down, and complain. Never forget: the customer is always right.