Next Jump, which powers rewards programs for thousands of corporations and credit card companies, has been steadily expanding its platform to offer a more social experience for consumers. For example, the startup inked a deal with LivingSocial to get access to its inventory of daily deals, and allows users to use Next Jump’s WOWpoints to buy deals and merchandise from retailers like Target and Walmart. Today, Next Jump is unveiling another piece of the puzzle with the debut of Ella, an iOS app that allows you to earn and reward WOWpoints for sharing fashion and shopping tips with your friends.

Ella’s iOS app opens up a map of your current location that shows you where fellow Ella users have posted a tip and photo of a fashion item or good deal at a store nearby. If you like the tip, you can comment on the share and reward users with one WOWpoint, which is worth a penny on Next Jump’s rewards platform, OO.com. And when you post tips and photos, you have the opportunity of earnings WOWpoints as well. Essentially Next Jump is attaching a reward to the act of liking a shopping tip. Ella also features the top users who have WOWpoints and share via the app.

You can spend these WOWpoints you accumulate on OO.com, which lists millions of products from more than 30,000 merchants including Target, Walmart, Amazon, and Buy.com.

Next Jump says that in the future, Ella will include Facebook Connect so you can access tips from your friends as well. And the company will soon launch similar apps in other verticals, such as travel and restaurants. 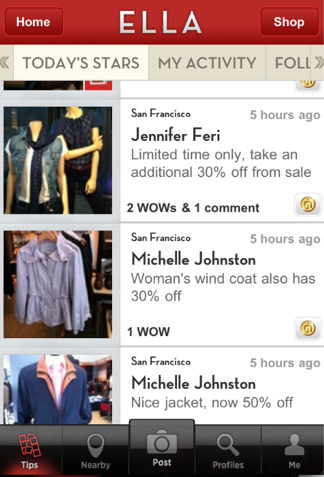