It floored me to think that here I was, cruising down this familiar two-track at nearly 60 mph. This is the route to one of my tree stands and generally a trip done in my father-in-law’s Ford F150. But my teeth were still intact and I didn’t feel like the trail was crushing my spine. I was floating along in this $89k Lexus flagship, cooled by air-conditioned seats, jamming to Sublime on Rdio over a Bluetooth link to my Droid X. The windows were down, the sunroof open and I have two bottles of water in the air-conditioned cooler box directly under my right elbow. Life was good.

The 2011 Lexus LX 570 served me well over the last week. It performed admirably as a camping utility vehicle in the backwoods of Michigan and equally as well around town. I don’t think I’ve ever been more satisfied with a vehicle that has a potential deal breaker. 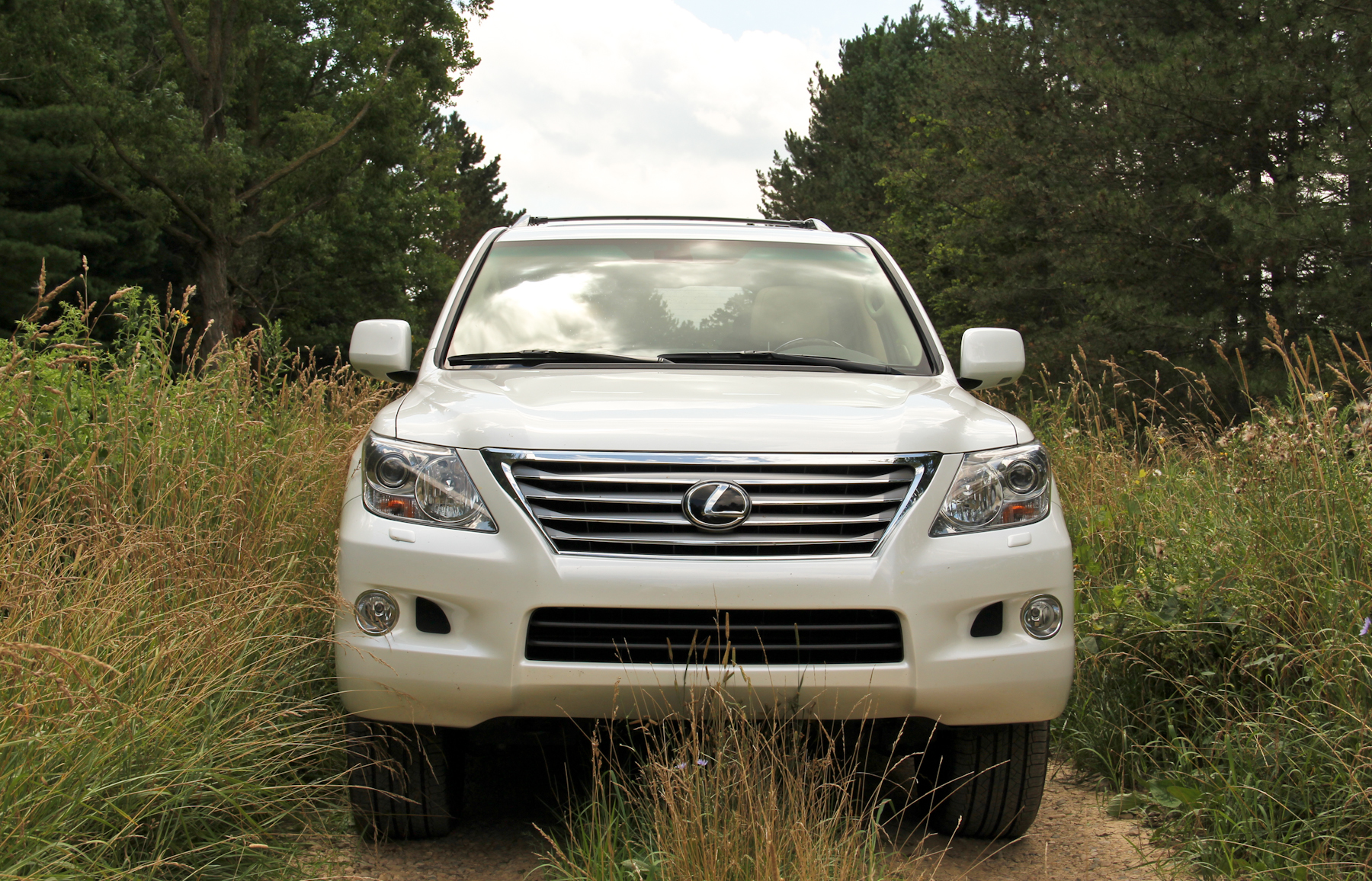 Think of the LX series as Les Stroud in a suit. He still packs all the knowledge and aptitude that made him Survivorman; he just wouldn’t go out in the rainforest dressed this way. Sure, he could traverse a rock field if he wanted, but it just wouldn’t be right. He would ruin his slacks.

That’s how I felt during my time with the Lexus LX 570. It’s just too nice of a vehicle to get really dirty. The fact that it wasn’t mine helped counter that feeling as I didn’t have to worry about the suspension 20,000 miles down the road. I wanted to take the LX 570, with its 9 inches of ground clearance and automated crawl control into something extreme, but it just didn’t feel right (that and I couldn’t find any suitable location). Besides, that sort of tomfoolery is best reserved for its less fancy, but similarly capable cousin, the Toyota Land Cruiser.

See, the LX 570 is about as well endowed as an SUV can get; my tester had a sticker of $89k. Forget about the vehicle’s off-roading chops for a second — there isn’t a creature comfort missing from the LX 570. It’s as well equipped as the Infiniti QX56 or even the Mercedes G or GL class. The LX 570 packs more tech and amenities than a fully-loaded Cadillac Escalade. Only the Range Rover with its digital dash cluster packs something notably different even though we found that feature to be rather silly.

It has everything: a 19 speaker Mark Levinson audio system, rear seat entertainment with remote, Bluetooth and USB connectivity. There are four heated and cooled seats to match the four zone climate control. An around the vehicle camera system is optional, which with a vehicle of this size, is equally important in a parking lot as it is off-roading. A powered split rear lift gate opens revealing power controls to fold up the back row of seats. The LX 570 has adaptive cruise control dubbed by Lexus as Dynamic Radar Cruise Control. There’s a powerful 383-horsepower engine paired to a silky six-speed sequential-shift automatic transmission. With a curb weight of 5,995 lbs, it’s three tons of fun.

Sitting in the driver’s seat is like commanding a luxury yacht. You have at your disposal many functions, yet when set in motion, the vehicle does most of the work for you. Even the vehicle’s speed in crawl control mode is automated. There’s a substantial center-mounted rocker switch that sends the vehicle forward or back at predetermined speeds. Your only task — besides steering — is to decide the vehicle’s height and then use a neighboring rocker switch to raise or lower the truck.

This isn’t a bad thing per se. It allows the driver to enjoy the opulence within. The seats are amazing and I’m saying that after driving 400 miles with my four-year old constantly kicking the headrest. They’re just that good. The four zone climate control has what might be the coldest air conditioning on the planet and even an air filter system that helps to remove allergens, air particles and the general stank of camping.

Unfortunately, while the vehicle’s drive system is a wonder of technology, that cannot be said for the infotainment system. It’s a relic of the past. Even the radio functions are a pain to use thanks to the dated UI. The system uses tabs, folders and redundant physical buttons to control everything, which actually over complicates simple tasks of just flipping through the stations. This system is used in most current Lexus models and needs to be revamped in a serious way. It’s not all bad news: the system at least supports streaming audio over Bluetooth and USB.

When you finally find a station and cue up a good song, the Mark Levinson audio system will make you forget about all past transgressions. It didn’t matter what type of music I played, it shined on this system. The highs are crisp and tight. The lows are strong enough to embarrass many aftermarket solutions. This shouldn’t be surprising, though. Mark Levinson is known for its powerful audio systems and the system used in the LX 570 spreads 450 watts over 19 speakers at less than .1% THD. It’s impressive but still doesn’t make up for the sorry infotainment system.

Features are not enough these days to make up for a sorry user experience. Automakers seemingly have had a hard time transitioning from buttons to touch and Lexus is not alone in having a poor UI. GM’s current system feels like it was made in the mid-nineties and the next-gen version is not much better. Ford’s MyFord Touch is impressive but also imposing to a novice. I’m not a fan of Honda’s or Chrysler’s. Audi and BMW got it right but did so without using a touchscreen. They instead employ a multi-function puck of sorts, which sort of implies that touch isn’t yet right for cars. 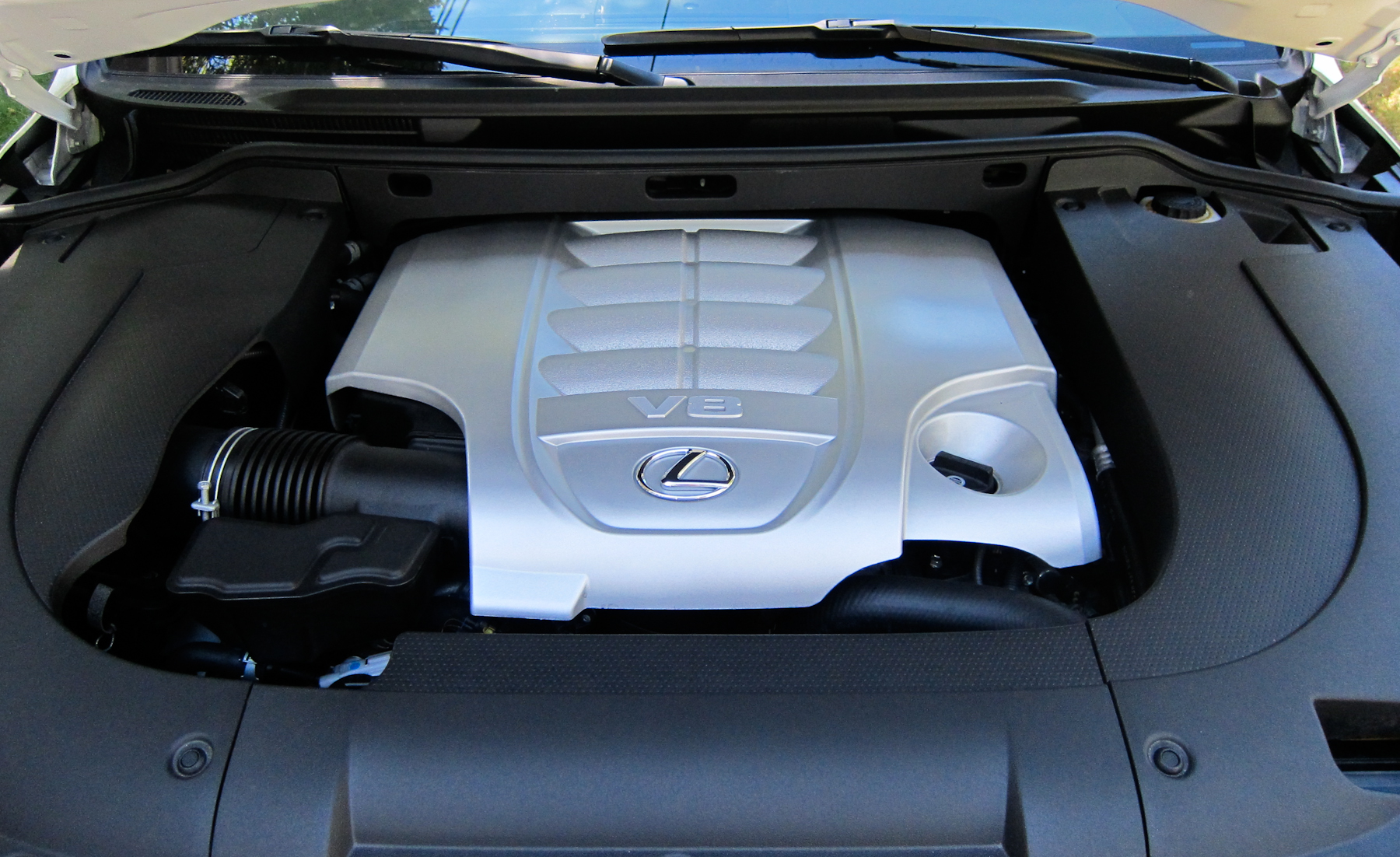 The rest of the LX 570 makes up for the poor infotainment system. The vehicles main interface would be a deal breaker in other vehicles, but the ride, handling and feel completely counter the relatively important system. The 383 HP and 403 lb-ft of torque more than handle the 5,995 lb truck. Lexus brags that it even manages a 7.4 second dash to 60 mph. The EPA rated it at 12 mpg in the city and 18 on the highway. Much to the surprise of the my lead foot, I managed an average of 18.7 over 535 miles. It officially seats seven, but the rear bench seat is only suitable for those not yet tall enough to ride roller coasters.

I’ve always enjoyed looking at an OEM’s top-tier SUV like the LX 570. It’s a solid barometer for the automaker as its designers, engineers, and the bean counters are freed from the traditional boundaries. There’s no reason to save weight or worry too much about fuel economy. There’s physically room to throw in every toy available and who cares about the end sticker price. In that sense the LX 570 serves the Lexus brand well. It has more raw capabilities than most other vehicles in its class and looks great doing it. It could be argued that it has more capabilities than necessary and a similarly equipped SUV can be had for tens of thousands less. That’s not the point. The LX 570 is at the top of the luxury SUV mountain.