Twilio, the company that’s on a mission to help developers bake telephony into their applications, is launching a new feature this morning that could well give rise to a slew of startups (or, at the very least, a bunch of new features in existing web and mobile applications).

In short, it’s letting developers integrate the flexible and cost-efficient power of VoIP — the sort of technology used by services like Skype and Google Voice — into their own applications. And it saves developers the hassles involved with building out the infrastructure typically required to handle a VoIP service. Meet Twilio Client.

At a high level, Twilio Client is probably best described as a platform that facilitates embedded VoIP communications, but that’s confusing and doesn’t really demonstrate what exactly it does. So let’s try a few examples.

Say you had a social network (I’ll pick LinkedIn) that wanted to let users initiate voice calls with other users — but without requiring either party to actually hand out their phone numbers or IM handles. With Twilio Client, LinkedIn could bake that functionally in: you’d click a button next to a friend’s screen name, the other party would see a popup asking if they wanted to talk to you, and the call would be routed over Twilio’s VoIP pipes. Skype could probably offer the same thing, but it would take a special partnership — with Twilio, any app can implement this.

Another example: in addition to the web version (which is open to everyone starting today), Twilio is also launching mobile versions of Twilio Client for Android and iPhone. This means that mobile developers will be able to include voice calling functionality into their applications without requiring users to exchange phone numbers. This is obviously great for services where some anonymity is preferred (say, a dating app), but plenty of other apps could benefit from voice calls as well: marketplaces, social networks, even games.

Obviously this is going to give Skype some competition. No, Twilio itself isn’t going to be launching a direct Skype competitor any time soon, but it’s handing developers the tools to reproduce much of Skype’s voice-related technology. Back in 2008 Lawson told me Twilio could recreate GrandCentral (now Google Voice) in 15 lines of code. For this launch, he says you could reproduce Skype in the three lines below. Obviously that’s got a hefty dose of hyperbole, but the point still stands: it’s now possible for developers to mirror the basic functionality of Skype Voice, which means they’ll be able to focus on innovating above and beyond those core features.

Of course, most of this is not free. Twilio is charging 1/4 cent per minute for pure VoIP calls, and calls that are routed from a VoIP client to a normal phone line are two cents per minute (in other words, developers have a strong incentive to push users toward making VoIP-based calls).

We should note that the service offered by Twilio Client isn’t entirely unique — Jajah, for one, has done VoIP integrations on both websites and mobile apps. But Lawson says these are generally one-off deals with larger companies, as opposed to an API anyone can access. Likewise, Skype’s SkypeKit lets developers bake Skype functionality into their products, but it’s aimed primarily at consumer electronic devices.

Twilio Client could be a big deal. Twilio’s SMS API gave rise to a wave of group-texting startups, and I won’t be surprised if we see a lot of innovation on this API over the next six months (they’ll help kickstart that next wave at a Twilio conference that’s being held September 21 and 22). 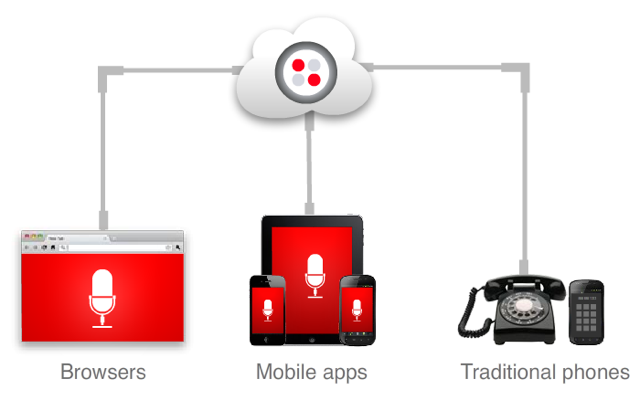