Quantitative analysis startup Quid is getting a major vote of confidence and $10 million in a Series C round from a raft of serious investors. Niklas Zennstrom’s Atomico Ventures, Ron Conway’s SV Angel, Peter Thiel’s Founders Fund, Endeavour Vision, Infocomm Investments, and Korean investor Charles Lho all invested in the Series C financing. (Founders Fund and Lho were already investors. In addition PayPal co-founder Max Levchin has joined the board.

You guys might remember Quid from our “Does Quid have the most pretentious website of any startup ever?” post, where we discussed its choice of primary versus secondary typeface and implored the company to get a primary business model before it made a fuss about fonts.

Quid CEO Bob Goodson tells me that that pretty snarky post was actually a boon for Quid, and attracted ultra high quality engineers including a “computational linguist” named Orion Buckminster Montoya who felt that he would fit in perfectly with the startup’s highfaluting culture. They also have a guy named Bong on their team! (Quid got the same artist who does all the Wall Street Journal drawings to make portraits of its engineers, of course, below).

“We are generating more information each year then the rest of human history put together,” says Goodson, “Data is one of the most important trends of the time we live in. Imagine the insights in the world that are now possible with this information, which hasn’t been available before? We’re building the tools to mine these insights, and help people make more informed decisions.”

Quid is planning on using the cash to add 18 more new engineers to its team of 45 and to focus on its product, which is software that visualizes trends across the tech industry for blue chip clients like Microsoft who pay ~$1 million yearly for a subscription. Goodson tells me that the company plans on expanding into other industries once it has nailed down the tech sector. 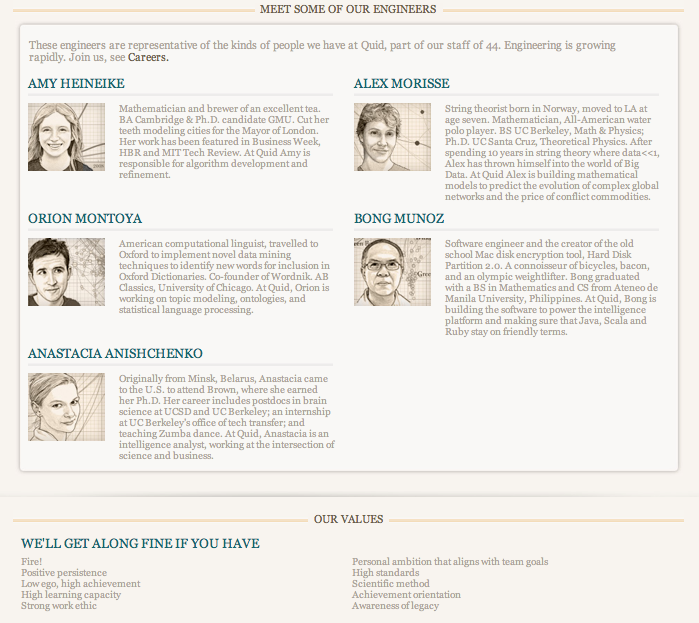