Crowd-funding website Kickstarter has put up an interesting retrospective post today in honor of their 10,000th successfully-funded project (an Ohio band putting together a 7″ if you’re curious). We were privy to some of these numbers (or their predecessors, anyway) when co-founder Yancey Stickler and some successful project creators took to the stage at Disrupt NYC, but now they’re here in graph and blog form for those who missed the panel.

The growth of the site is remarkable: it has funded the same number of projects in the last month as they did in their whole first year (1044). The trends seem to show some areas leveling out, but that may not be a bad thing.

We tend to look for the tech-related projects (today I posted the gorgeous Pen Type A) more than the far more popular media projects, so we have a bit of a skewed perspective on the site: the things we see are often on the more expensive and more rarely funded end of the scale, as they often require prototyping, manufacturing, and packaging. But a huge majority of the projects are in fact music and film. Fashion and games join tech at the bottom of the list, perhaps because those tend to find other avenues of bootstrapping.

One eloquent graph shows the decline in number of days required to achieve $5 million in pledges: 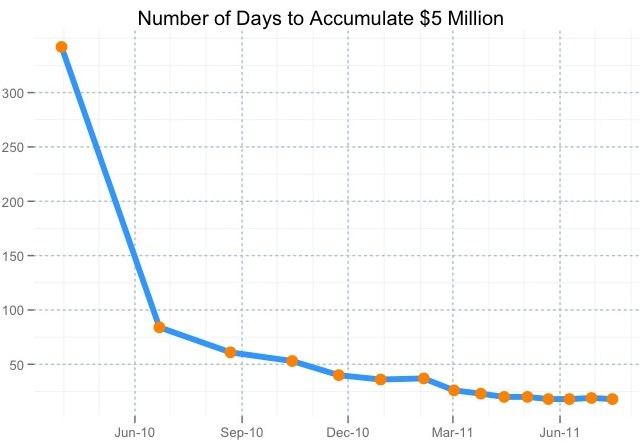 As you can see, it’s bottoming out. Steady growth in this display yields diminishing returns, as it will take quite a few people if they want to reduce that number from 23 to 20. And this graph shows a sudden peak in projects successfully funded (note that these graphs refer to different time periods, so don’t draw any conclusions by lining them up vertically): 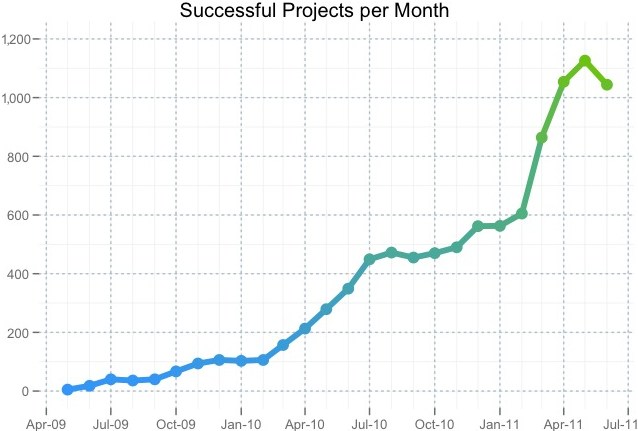 That could be for a number of reasons, though Strickler and Benenson (who authored the post) offer no explanation. I would hazard a guess that they are reaching the efficiency ceiling for their staff and layout. With over 300 projects being submitted a day (according to Strickler in May), approving and monitoring them is more than a full-time job. It’s possible that the way the site is organized doesn’t scale effectively beyond this volume of projects (like app and grocery stores, where at some point the multiplicity of options makes finding what you want more difficult), but it could also be for another reason beyond the scope of the data they have revealed.

Whether Kickstarter attempts to resume that sharp growth it’s seen in the last year or whether it decides to streamline and make it a more curated experience is entirely up to them. I’d like it either way; I’m no fan of growth for growth’s sake. The next year should be an interesting one for them.

Lastly, check out this blink-inducing video of all 10,000 successful projects’ pages: