Back in June I wrote about Clever Sense, a startup that’s looking to take a different approach to restaurant and other local recommendations. Led by CEO Babak Pahlavan, the service has a strong emphasis on algorithms that are used to customize its suggestions for each user (the company is led by Stanford PH.D. grads, and is advised by Professor Jeff Ullman, who was the Ph.D. advisor for Sergey Brin way back when).

Their application, called Seymour, was supposed to launch tomorrow morning in conjunction with Fortune’s Brainstorm conference, but it hit a somewhat fortuitous snag: CleverSense decided to release it early on the App Store under a different name (Alfred) as a sort of trial run. And then the app managed to acquire 20,000 users in the last two weeks — so Clever Sense decided to ditch Seymour and stick the the app they’ve already released. You can grab it on the App Store right here.

The promise behind Seymour.. err, Alfred, is that it can learn the restaurants and venues you like to frequent and make high-quality suggestions based on your preferences. The whole app is built around recommendations and speed — the goal is that once you’ve set up your taste profile, it should only take one tap to get a recommendation, with a minimal amount of filter futzing required.

First, you’ll run through a set of questions designed to establish your preferences (what’s your favorite place to eat breakfast, your favorite place for drinks, and so on). Then, the next time you launch the app, it’ll give you a grid of options depending on the time of day. If it’s around 1PM, you’ll see an option for Lunch and one for Coffee. Tap one of those, and the app will immediately give you some good (probably) suggestions. You can flick through multiple suggestions if the first one doesn’t suit you, and Alfred will also include a caption explaining why it thinks you’ll like something.

I’ve seen the app in action a few times now and it’s worked well — some of the suggestions are pretty obvious, but I’d imagine it would come in handy when I’m in a part of town I don’t know very well. And so far it seems iPhone users are having a lot of luck as well — it’s racked up a 4-star rating and has plenty of very positive reviews.

For more on the technology behind Alfred, see our report from last month. 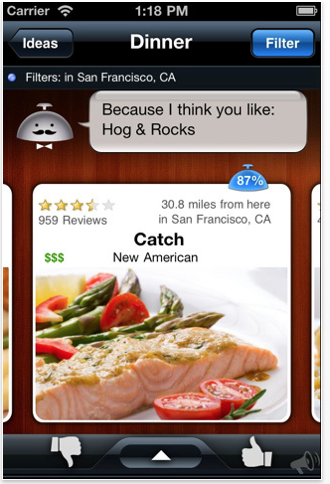