Hot on the heels of all this Google+ madness, Microsoft has “unintentionally” leaked its own social networking platform. Whether this is a grab at all the hype or a genuine mistake on the part of some IT guy, we still have one question: What the heck is a Tulalip? I kid… Fusible, which picked up the story first, discovered that the name Tulalip is also the name of a Native American tribe located near Redmond, Washington, Microsoft’s home turf.

The teaser page pictured below was published to the web today on socl.com, which is apparently owned by Microsoft, reports Fusible. There are rumors that Microsoft is the lucky buyer of Social.com, which would mean they paid $2.6 million for the domain name alone. 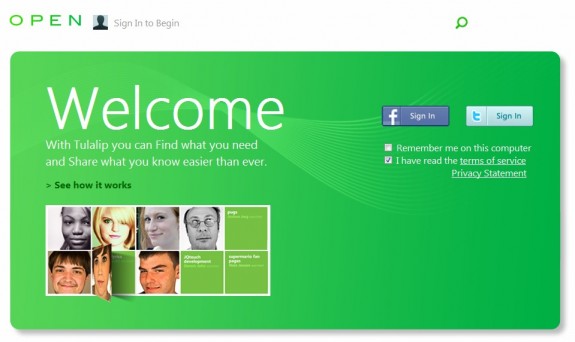 From the looks of it, this will likely be a venture into “social search” with Bing running the show. “With Tulalip you can Find what you need and Share what you know easier than ever,” reads the teaser tagline. Notice the capitalization of Find and Share? Yep, we’re pretty sure this will be where search meets share, which is kind of good news since you can’t do a Google search within Google+ (What’s that all about, anyways?). Oddly enough, there are Facebook and Twitter log in fields on the teaser page, which leads us to believe that this will be a rather light foray into social networking rather than a heavy-duty Microsoft experience. If you can’t beat ‘em, join ‘em right?

The teaser page has since been pulled, while Microsoft swears it was an accident. Here’s what they replaced it with: “Thanks for stopping by. Socl.com is an internal design project from a team in Microsoft Research which was mistakenly published to the web. We didn’t mean to, honest.” Well, we’re still not sure if we buy into that whole “we didn’t mean to” part, but either way, we’re glad it happened.