While it would be nice for Apple to be able to say that they’re suddenly dominating the laptop sector as much as the tablet sector, in fact things seem to be just puttering along as usual. Apple has seen steady but unremarkable growth for years, and although one might reasonably expect a serious boost or some other effect from the iPad and iPad 2, they don’t appear to have contributed anything more than fuel for the continuing slow burn.

The second quarter of 2011 stats (as reported by Gartner) show more of the same, but Apple has passed up Toshiba by a higher-than-average growth rate, gaining 1.5% in the last year compared with Toshiba’s 0.9%. The other laptop makers are seeing various amounts of decline in the US, but healthy growth worldwide.

Here’s the US growth: 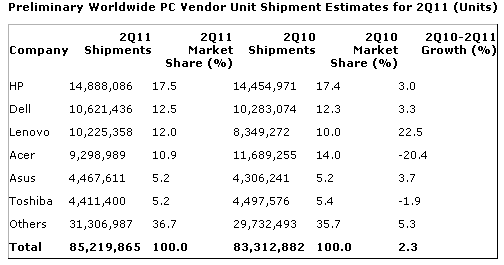 Acer is the loser here, dropping by over 20% in the US and internationally, partially due to inventory reduction on their part. Overall sales were up slightly, but nothing to get excited about.