Short Version: The Dragon Go app from Nuance basically takes your average voice search and gives you seven relevant paths to choose from. With Nuance’s natural language processing technology, Dragon Go can understand what it is you’re trying to get out of the search, instead of just throwing a string of words at Google and saying a little prayer. Based on your search, Dragon Go chooses the best possible sites to match your request, complete with social network integration. I found the UI snappy and smooth, and no matter how hard I tried, I was unable to trick the voice detection. Overall, I give it a solid A. 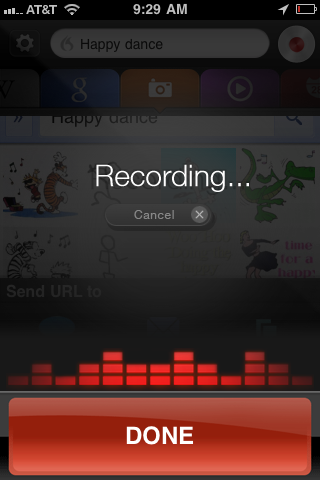 Long Version:
Nuance has come out with the third in its Dragon series of applications, and each time the experience gets better and better. The latest app, Dragon Go, takes Nuance’s voice recognition software to the next level, and adds a way of understanding not just the words spoken, but the intention behind the voice query, through a system called natural language processing. Once the query is digested, Dragon Go spits out results across seven different relevant paths, whether it be YouTube, Ticketmaster, Milo, Yelp!, etc. Wikipedia and Google are always displayed, no matter the search type.

So for example, if I search for “reservations at Del Frisco’s,” the first tab that will come up will be OpenTable, along with tabs from Yelp!, MenuPages, Google, and Wikipedia. If I search for Dallas Mavericks, I’ll get hit with ESPN, Yahoo! Sports, and other relevant tabs. When I search for Dallas Mavericks tickets, I’ll see Ticketmaster pop up first, then StubHub, Google results, etc. If you’re shopping for a new pair of Vans shoes, the fact that you mentioned a product name indicates to the app that you’re shopping, and will serve up eBay, Amazon, and Milo. The same is true of news queries. If I search for “presidential candidates 2012 – New York Times,” the prominent page will be the Times, but the alternate tabs will also show USA Today, CNN, and other news sites’ coverage of the presidential candidates.

Another cool features is that it can launch native applications. A lot of what we search for can be better served through an app. For example, if I want directions from my current location to Penn Station, the best way to get that information is through Google Maps, and Dragon Go knows that. In fact, it won’t just launch the Maps app, it’ll drop the pins and all you have left to do is press Start. It’ll also launch the media player if I say “My Humps by Black Eyed Peas.” I can go a step further and say “Black Eyed Peas on Pandora,” and Dragon Go hooks me up with a Black Eyed Peas channel on Pandora.

Overall, the Dragon Go app is a pretty impressive little search engine, but I believe it’ll be best for queries with a clear destination in mind. This isn’t your average “surfing” search, where you just throw out queries based on curiosity. That’s not to say that you can’t ask some random questions to Dragon Go and get the results you’re looking for, but I wouldn’t see that as a primary use of this app. Rather, I see Dragon Go becoming a sort of planning application. Since it features social media integration and sharing through Facebook, Twitter, email, and SMS, you could basically search for movie showtimes, tickets, reservations on the fly, and blast out your plans to friends within seconds. In short, Dragon Go reduces clicks, and that’s exactly what we want out of search. 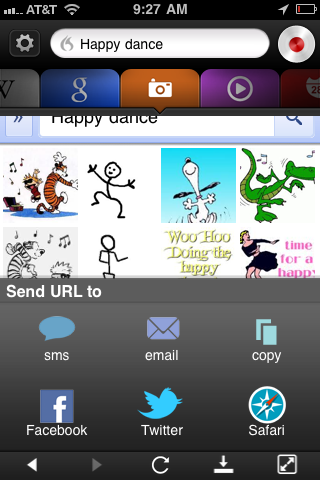 I found the actual voice detection itself to be incredibly accurate, even when I tried to throw it off with a few non-English words like Le Pain Quotidien. The interface is easy to use and pretty smooth: relevant tabs are on a carousel up top, and the share tab slides up from the bottom without blocking the page you’re sharing. I also enjoyed the fact that Dragon Go includes Twitter search results within most of your searches, so you can see what people are saying about The Green Hornet, or Lady Gaga’s latest outfit.

I did get a bit frustrated a couple times when my search results defaulted to Google. It mostly happened when I asked questions, rather than giving a direct command. For example, when I asked questions like “How do you cook rice?” or “Where do babies come from?,” Google was my prominent page. This is where I feel like Yahoo! Answers or other forum sites should come into play. Obviously, that takes some contract-signing on the parts of the suits at both those sites and Nuance, but it would be nice to be served maybe the top site on Google’s results page for those queries, instead of just Google. The whole point is to speed up the process, so the better Nuance gets at taking my question and bringing back an answer, the happier we’ll be. Oddly enough, the search for “how to make a baby” brought back results on a map, which is incredibly curious to me.

Either way, the app definitely gets the job done, and I’d say that this is Nuance’s best Dragon app yet. The Dragon Go app is available now as a free download in the Apple App Store for the iPhone, iPod touch, and the iPad.