The combined search market share of Microsoft’s Bing and Bing-powered Yahoo (AKA BingHoo!) keeps creeping up.  The latest market share figures from comScore’s qSearch service are out, and the combined BingHoo! climbed to 30.2 percent market share of total explicit searches (excluding the effects of slideshows, contextual search, and Google Instant), up 0.2 percent from May.  Google remained steady at 65.5 percent share.

When you drill down into the data, Bing keeps adding share (up 0.3 point to 14.4 percent), and Yahoo seems to have stabilized at 15.9 percent for the last three months.  And Bing’s year-over-year growth in market share is an impressive 41 percent, compared to 6.4 percent growth for Google.  That’s not a bad growth rate for Bing two years after launch.

The big question is whether the combined BingHoo! can ever get significantly above 30 percent. Since October, it’s gained about 2 points, from 28 percent.

Google also powers search on Ask and AOL. If you add those up, it’s share goes up to 69.8 percent. So there is still a lot of room for Bing to grow. And these numbers do not include mobile search, where Google is even more dominant. It’s gonna be a long war. 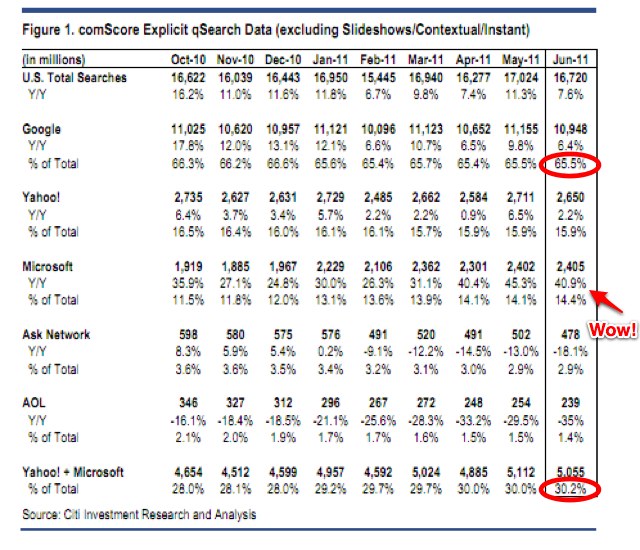