Last week, we reported that Mixed Media Labs had spun off their initial project, PicPlz, to be able to work on their next big idea. Well, now we know that next big idea: App.net.

The easiest way to think of App.net is as “About.me for apps”. At first glance, that may seem a bit lame. But the truth is that it’s a very good idea. The reason About.me works, and why the idea is expanding to other verticals (such as Onesheet for bands), is because it’s a simple idea that gives value on both sides of the coin. The companies/people creating these pages get a streamlined way to have a robust yet simple presence on the web. End users get a single place they know they can go to in order to get what they’re looking for. With the explosion of apps, this is vital.

App.net offers the ability for any iPhone or Android app to create a customizable landing page on the web. “This is the bridge between apps and the web,” founder Dalton Caldwell says. “This is the product I basically wish existed before when I was working on imeem and PicPlz. But it didn’t. So I had to build my dream product,” he continues.

Caldwell talks about the big mismatch between apps and the web. Sure, both the Android Market and Apple’s App Store have web experiences now, but they’re not great in terms of showcasing the apps. The App Store web presence is simply a page that wants to automatically push you to the App Store within iTunes after you see a sort of half-assed re-creation of the app page on the web. The Android Market is, well, ugly. And not customizable.

“If I’m doing real marketing for my app, pointing to the App Store web page is lame. You don’t point to the Amazon buy page for a product,” Caldwell says. And while plenty of companies do create their own landing pages now for their apps, that can be a pain if all you want to do is make the app and not worry about anything else.

Plus, App.net comes with a big value proposition: analytics.

Caldwell notes that right now, tracking clicks and actions for apps on the web is a “black box”. App.net aims to open this data up to app developers. “If you can solve this problem, it opens up such an opportunity for people going all-in on apps,” he says. 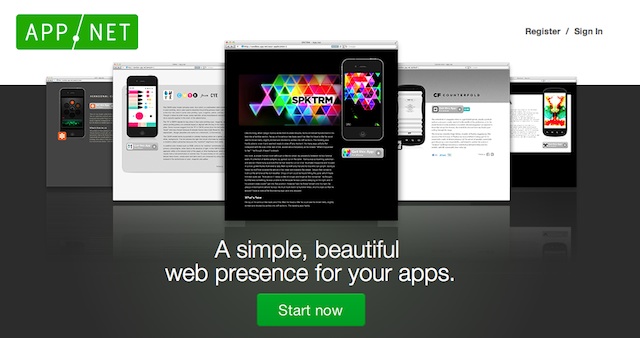 Today brings version 1 of the product. It will feature landing page optimization tools, funnel analytics, and the ability to create “smarter” download buttons. These buttons let app makers spread these across the web in order to track who is coming from where with interest in the app.

Dalton admits that this is another layer on top of these apps stores, but calls it “the ultimate hott ass landing page you wish you had”. And he notes that the experience is even better on mobile devices. If you’re on a mobile device, you hit the download button, and you go right to the app store (because App.net knows that it’s installed on either the Android or Apple device).

“We’re not trying to solve the app discovery problem,” Caldwell says. “Consumers don’t sign up. This isn’t something like Chomp. This is giving the app developers tools to use to direct people through existing social channels to their apps,” he says, pointing out that each page can have a Facebook Like button, a Tweet button, and even the +1 button. There’s also the ability on these pages to get people to easily follow your company on Twitter and/or Facebook.

And App.net already has some big apps signed up as partners. AOL Radio, Bump, ColourLovers, Evernote, Fashism, Hashable, Hypemachine, Message Party, Mindsnacks, PicPlz, Rdio, RockMelt, Shoutcast, Skimble, Songkick, SoundCloud, Sporcle, TinyZoo, and Trulia, are all on board. All of these apps will reside at “app.net/APPNAME”.

In terms of pricing, if you only have one app you want to make a page for, it’s totally free. If you want to make App.net pages for up to three apps, it’s $12 a month. For up to 6 apps, it’s $22 a month. And for up to 20 apps, it’s $49 a month. Caldwell notes that if you’re doing more than one app, you likely have an app business that’s making some money, so those developers should be open to paying a fee.

“This is the most exciting project I’ve ever worked on in my career,” Caldwell says. “I don’t say that lightly. It solves real problems.” 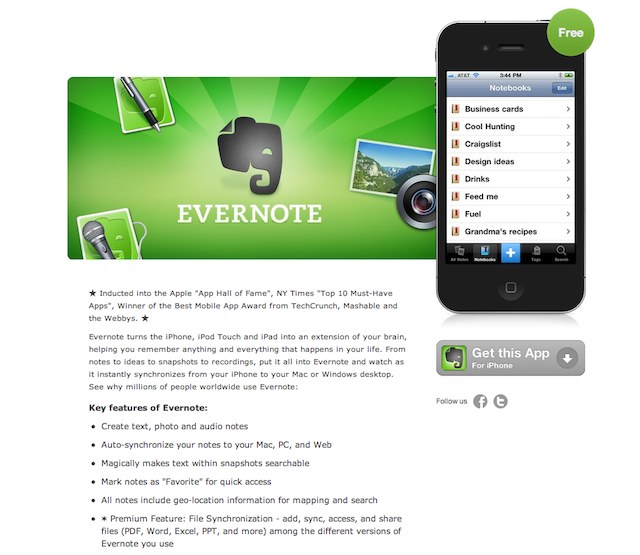