A Lion is quickly approaching. OS X Lion — aka OS X 10.7. Some are saying it will hit this week. Other signs point to next week. Either way, it’s coming very soon. How do we know? Apple has just put out a call to developers asking them to submit their OS X Lion apps for the Mac App Store.

The email message (pasted below) notes:

OS X Lion, the eighth major release of the world’s most advanced operating system, will soon be available to millions of Mac users around the world. Submit your Lion apps for review now so they can be on the Mac App Store when Lion ships this month.

A GM build of Lion was released to developers last week. By most accounts, it is solid and seems ready to go. The hold up now may be Apple’s preparations to ship new MacBook Airs (and perhaps even Mac Pros) alongside the new OS.

One key feature of OS X Lion is the Mac App Store. While the store has been available for OS X Snow Leopard since early this year, it will be fully baked into Lion. That is likely to make it the main way OS X apps are distributed. The fact that Apple is only distributing OS X Lion this way as well (though you apparently can also go to an Apple Store where they can download and install it for you) says all you need to know.

You’d think Apple will need at least a few days to start reviewing these Lion-specific apps from developers. You can be sure they’ll want a range of them ready for launch. Will there be enough time to review a bunch of them before the rumored Thursday launch? We’ll see.

Regardless, “this month” only has 20 days left… 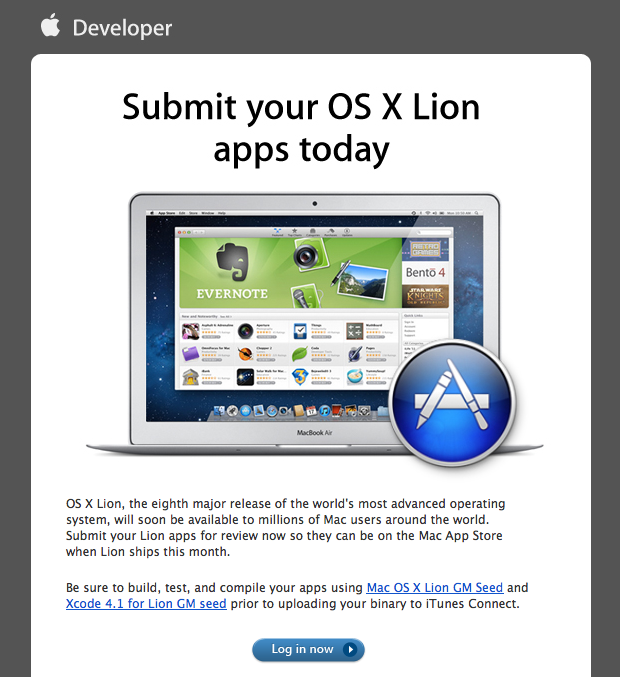