When it comes to getting people to sign up for a website, developers have a multitude of tools available to refine their signup flows, like A/B testing and funnel analytics. But there’s something that these tools often miss — when a user does finally convert, it’s also helpful to know which ads, links, and splash pages didn’t work for them the previous times they arrived at the site. Unfortunately, that’s a bit harder to track.

Now analytics service KISSmetrics has an answer. Today the company is launching a new feature that will let site administrators hone in on individual users to see both their current usage history on the site, and their history before they actually signed up for an account.

That may sound a little familiar — we recently wrote about Mixpanel, which just launched a real-time user tracking feature of its own (Chartbeat and Media Temple’s Reinvigorate offer similar features as well). But cofounders Neil Patel and Hiten Shah explain that what KISSmetrics is doing has a key difference.

As with the other services, KISSmetrics will let site administrators hone in on individual users to see how they’re browsing through their sites, allowing them to figure out common usage patterns and areas that might need improvement (are people frequently getting hung up in a certain form?). But it can also track this data before users actually create accounts, by creating anonymous profiles tied to a user’s cookies, IP address, and other data.

Then, if that user eventually signs up during a later visit, KISSmetrics will associate their previously anonymous profile with their email address or user name. Which means that site admins can look at both how a user is currently using their site, and how they used it months or years before they actually created an account — which can be very helpful for analyzing what works for converting users, and what doesn’t. KISSmetrics actually launched a similar feature a year ago, but it was based aggregate statistics — now it’s possible to hone in on individual users.

Along with analyzing conversions, the feature lets admins run queries on data like a user’s first and most recent referrers, their average time between visits, and the expected lifetime value of the user.

Of course, as with other real-time site tracking services, this could be used to do creepy things. But that’s really up to the site administrator, and it’s possible to do creepy things simply by looking through normal site logs anyway, though this obviously makes it easier.

Patel and Shah say that KISSmetrics has now tracked 15 billion events across 1.3 billion users (events include things like clicks, commenting, and completing sign up forms).The company has also recently introduced lower priced plans geared toward startups, at $29 and $79 — their existing plans, which allow for more tracked events, begin at $149, and they say they have larger customers paying thousands of dollars a month. 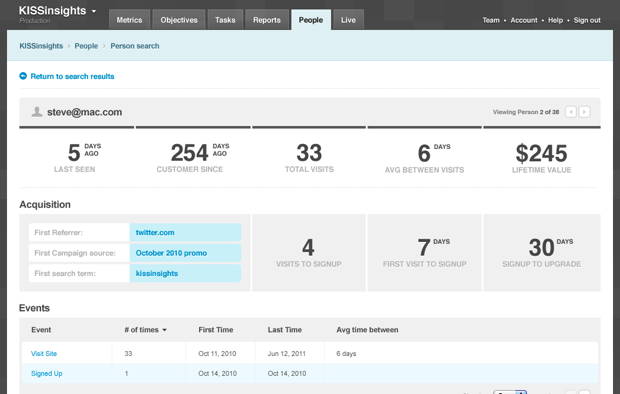 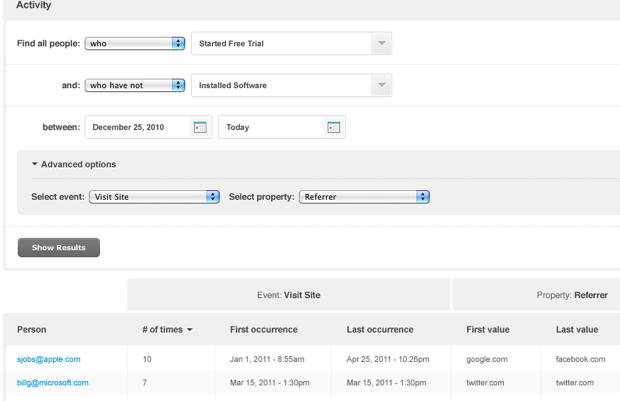