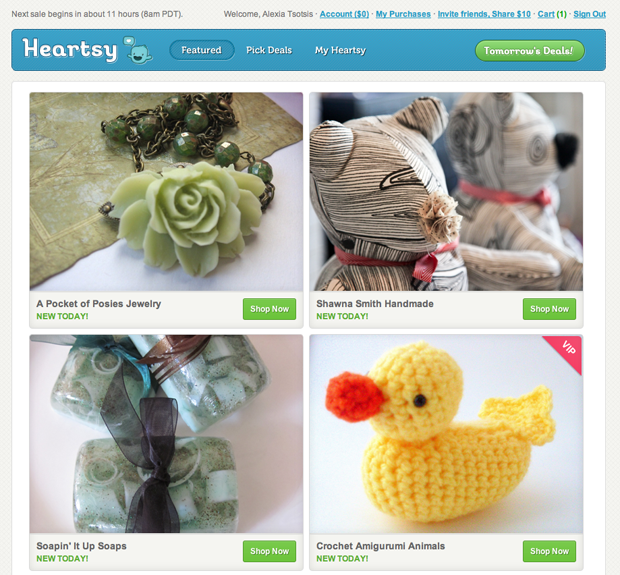 Earlier this summer we wrote a post on purchase sharing site Blippy’s decline, titled “The End Of Blippy As We Know It.”  While Blippy CEO Ashvin Kumar didn’t want to reveal what the team’s next step was at the time, we’ve now got a few more details to share as to what the company’s  new venture will be — Heartsy.me, a daily deals site for handmade goods and other products.

Heartsy.me has been around in incognito mode since February 2011 and has gotten considerable media pick up as a “Groupon for Etsy” mainly because of its novel twist on the concept of a social deals platform, letting users vote on what deals they want to see. Even we covered it, without knowing anything about the team behind it.

Basically Heartsy.me allows artisan sellers to offer group discounts like “$18 for $38 store credit at A Pocket of Posies Jewelry” or “$15 for $31 at Soapin’ It Up Soaps.” Buyers are redirected through the site to the seller’s Etsy listing and can use their Heartsy.me voucher there. After they buy a deal, users are given a unique link that they can share with friends to receive an additional $5 off their next Heartsy purchase.

The Heartsy.me community curates the featured sellers, using a novel “Pick Deals” feature to gage user interest, where users are given five credits at $1 each in order to give potential deal feedback. Once a seller in waiting reaches 60 “Yes” votes, the deals get passed on to the Heartsy.me community editors who complete the final step of curation.

The site monetizes through its VIP program, where for $8 monthly VIPs can get around a $10 credit at most of the featured stores, in addition to the Heartsy discount. VIPs also get early access and collection perks. The model seems to be taking off, since February the site has seen more than $564K in sales, with 47k vouchers sold from 646 sellers.

Kumar wouldn’t give me much more detail (ultimate plans for the site are still in flux he says) but did confirm that Heartsy evolved from the learnings at Blippy and that Blippy will continue to run independently, ” As a team we haven’t made any decisions about Blippy, we’re primarily focused on this,” he said.