A new study by Yahoo (embedded below) shows that online video watching habits are shifting. People are watching longer videos and watching more at night during primetime. The chart above shows when people watch videos online. The blue line is today (2011) and the dotted line is two years ago (2009). The two lines show more than a 30 percent divergence during primetime.

So what changed? Peak online video viewing today is during prime time, between 6 PM and 9 PM. Only two years ago, prime time showed the biggest dip in online video viewing as people turned off their computers and turned on their TVs. But now, more people are streaming TV shows and movies from services like Netflix and Hulu, and they tend to watch those videos during the same time period they previously watched regular TV. While people may not yet be cord cutting, this data suggests that online watching does encroach upon regular cable and satellite TV watching.

Not surprisingly, people are watching longer form videos online (see chart below). Today, 18 percent of online videos watched are full length TV shows, versus 11 percent two years ago. And 8 percent are full-length movies, up from 5 percent in 2009. Meanwhile, the percentage of overall video content made up of short clips watched online declined by 10 points from 84 percent to 74 percent.

Some other interesting stats: 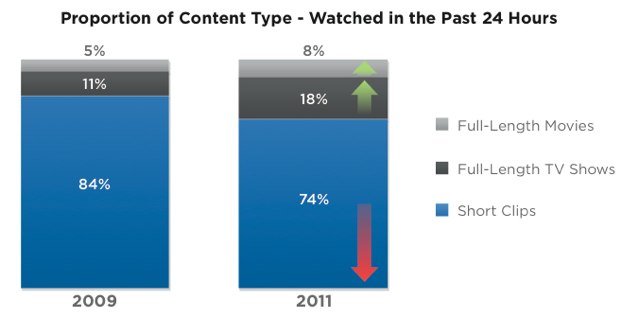