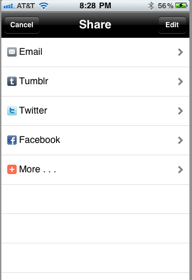 For background, the AddThis button sharing tool is currently deployed on 9 million websites worldwide and allows users to easily and quickly share content with others through more than 300 social networking services in 70 languages.

Previously, the company’s AddThis button was able to work on mobile sites, but these specialized versions can be used within apps, and are optimized for the native mobile OS. AddThis for iOS and Android is easy for app developers to implement, says Clearspring, because it is designed and optimized specifically for mobile devices.

Further, there is no additional work for publishers wishing to implement AddThis on the mobile web. The same tool used for the website automatically works in the mobile environment.

And AddThis integrates mobile sharing data from native apps and the mobile web with all other sharing data in an analytics dashboard giving publishers a complete view of the impact of social sharing on traffic. AddThis for iOS is available for download now, and developers can sign up for the Android version due out this summer.