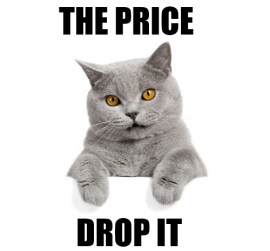 While Sony hasn’t given a yea or nay on this rumor, industry people are making noise about a possible price cut coming this fall to the PS3. Developers and merchants say software sales are down and it’s up to one of the big guys to start the price wars up again. Will it be Sony?

Microsoft is still riding the Kinect wave, and may wait to see what tack Sony takes before doing any bundles or promotions. Add that to the apparent revised console Sony is producing and it’s looking more and more likely that we’ll see a new price point and slightly different hardware. Oh, and that TV.

Of course, a fall promotion like this means less bargaining power come the holidays, but Sony may be relying on the Vita for its fourth-quarter sales. Too bad it’s not shipping until December 31st.

Now, this rumor is based in the UK, so there’s no guarantee any price cuts (which may really end up giving them price parity with the US and Japan) would carry over to this side of the pond. It would probably be announced at the huge Gamescom convention in Cologne.