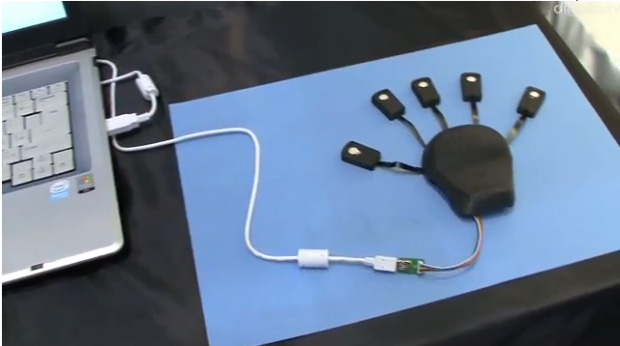 This looks like something straight out of “Minority Report”: Japan-based robot venture Double Research & Development Co. [JP] has developed a 5-finger mouse [JP] that can track the movements and pressure of individual fingers and send the information to a computer to trigger actions.

Users can also use two hands at the same time to control the device, dubbed amenbo, for complex actions. The amenbo can identify which finger of which hand is being used. It’s also possible to use less than five finger at a time.

It is also different from touch panels since a special sensor is attached to each finger, so it can identify which finger on whose hand it is, and even if you lift your fingers off it can follow them from beginning to end.

The Amenbo, in its current form, supports multi-touch operations on Windows 7.

This video (in English), shot by our friends at Diginfonews in Tokyo, provides more insight: