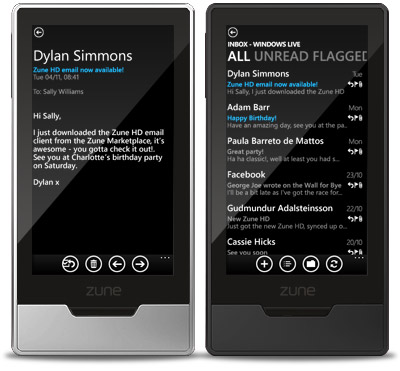 Nearly two years after its launch, the Zune HD finally has an email client. Microsoft enlisted the help of Matchbox Mobile, the folks that made the Zune HD Facebook and Twitter, to make a dedicated email app for the media player. The end result is an email app that supports Windows Live Hotmail, GMail and Exchange done up in the Zune’s Metro classic UI.

The trick is that Microsoft never intended the Zune HD’s XNA SDK to build productivity apps, but rather games. Because of this, the SDK lacked the necessary UI elemients such as lists, text entry fields and user controls. Matchbox Mobile had to develop those on their own.

Matchbox Mobile’s CEO, Simon Hamilton-Ritchie stated in the announcement, “Of all the developments that we have worked with Microsoft on, this was by far the most complex. But, in a market where it’s vital to continuously innovate, our technical excellence came into its own. Our internal development process enabled the entire development to be completed in just four months, including six weeks of beta testing.”

This new app seems to state that Microsoft isn’t done with the Zune platform just yet. Sure, the development is seemingly outsourced now, but it’s still being supported even as it nears its 2 year old birthday this coming September.